Tejashwi Yadav also attacked Prime Minister for not speaking on alleged scams in the state during Nitish Kumar government. 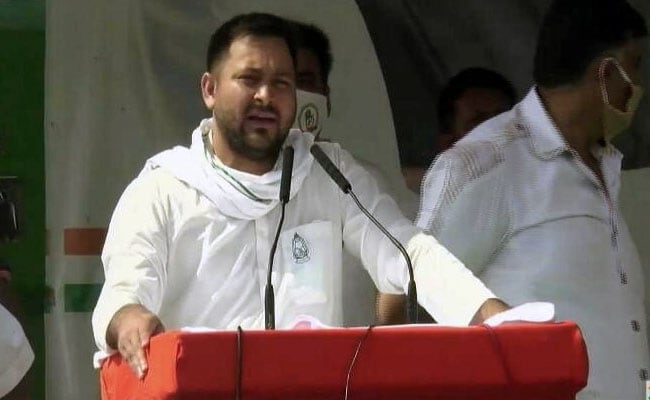 Addressing a press conference, Mr Yadav also attacked Prime Minister for not speaking on alleged scams in the state during Nitish Kumar government.

"For how long will the PM keep Bihar from the Special State status category? Bihar had hopes that he would speak about that. BJP talks about generating 19 lakh jobs depending on private enterprise. We will directly give 10 lakh government jobs," he said.

"We are keeping up with aspirations of youth. On the side, there is 70-year-old Nitish and Modi. There is a gap of 2 generations. Your government in Bihar is around 15 years. Now they are speaking about jobs, industries and factories. Modi ji should ask Nitish ji ''what was he doing for last 15 years''. In 2015 polls, PM Modi readout around 35 scams by Nitish Kumar in a public rally. Now, 25 more scams are added. We were hoping that he would talk about these scams," he said.

The RJD leader said that not a single penny was allocated to Bihar in the last financial year under the Ayushman scheme.

"The PM is the chairman of NITI Aayog. He should have said why is Bihar most backwards in sectors of education and health," Mr Yadav said.

Bihar assembly elections will be held in three phases -- October 28, November 3, and 7, and the counting of votes will take place on November 10.