Election in Bihar 2020: A VVPAT or paper trail voting machine had developed a fault at a polling booth in a village in Samastipur district, 85 km from state capital Patna. 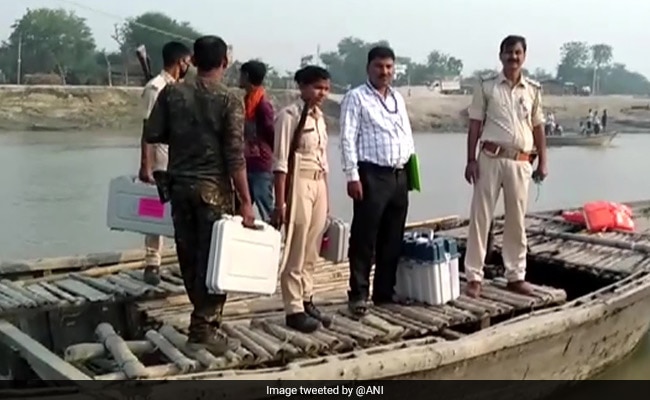 A team of Election Commission officials were seen taking a boat, crossing a river to reach a polling booth in a remote region of Bihar's Samastipur as the state votes today in the second phase of the assembly election.

A VVPAT or paper trail voting machine had developed a fault at a polling booth in a village in Samastipur district, 85 km from state capital Patna.

A technical team of the Election Commission and the police were seen standing on the boat which had a VVPAT placed on it, as they travelled to the polling booth to ensure voters can exercise their franchise.
Voting is taking place in 94 assembly segments in Bihar today, more than a third of the 243-strong assembly spread across 17 districts.

Over 2.85 crore voters are eligible to decide the fate of nearly 1,500 candidates in the second phase of the polls.

Among the key candidates in second phase is Tejashwi Yadav - the chief ministerial candidate of the opposition alliance of the Rashtriya Janata Dal, the Left and the Congress - whose massive rallies have drawn a direct barb from the Prime Minister. Mr Yadav, 31, faces the BJP's Satish Kumar in Vaishali's Raghopur, where he trounced him in 2015 and wrested the seat. The BJP leader, who beat his mother Rabri Devi from the same seat in 2010, has been given a second chance by his party.