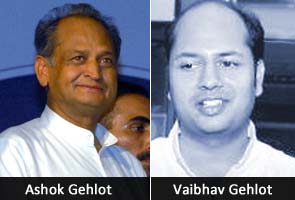 New Delhi: In never-seen-before numbers and volume, India spent the early part of April marching on its streets, rallying behind Gandhian Anna Hazare, demanding that a new law be introduced to check corruption.

The outpouring of public anger came after a maze of scams tumbled out of governmental files. In each case, there was careful collusion between politicians, bureaucrats and other practitioners of power. The most serious of these swindles - the spectrum scam which lodged former Telecom Minister A Raja in jail - has been declared India's largest-ever scam.

What Anna Hazare captured  was the mood of a country that is keen to see zero tolerance of corruption and of politicians abusing their privileges.

Documents accessed by NDTV now suggest that in the Congress government in Rajasthan, there was a clear conflict of interest in multi-crore rupee contracts being awarded to companies which employed Chief Minister Ashok Ghelot's son.(Watch)

The Chief Minister has denied allegations of corruption and nepotism. (Watch: Ashok Ghelot to NDTV).

Om Metals and Triton Hotels use Mr Gehlot's son, Vaibhav, as a legal consultant. Vaibhav joined Om Metals in 2006 - his salary was Rs 10,000 a month.

In May 2010, the Rajasthan government awarded a Rs 457-crore contract to  Om Metals - whose main business was hydro-power projects - to construct a dam across the River Kalisindh near Kota.

Two months later , Om Metals was granted another Rs 250 crore contract to build a two-lane 200-km stretch of the Rajasthan State Highway between Jaipur and Bhilwarah.

Om Metals denies there is a conflict of interest. "If Vaibhav Ghelot is a lawyer, he has to pursue his profession. He has been with us since 2006. It is not right to say that just because his father has become the Chief Minister, he has to leave his profession," Vikas Kothari, Business Development Director with Om Metals, told NDTV. (Watch)

Mr Kothari added that the 45-year-old company had bagged many turnkey projects in the state, and were sub-contractors in the Rs 457 crore dam-building project.

In July 2009, Vaibhav Gehlot also signed on as a legal consultant with Triton Hotels for a monthly fee of Rs 50,000.  A month later, the company was allowed to use 10,000 square metres  of land on the Delhi-Jaipur Highway booked for agriculture for commercial development.

The Triton Hotel came up pretty quickly after that.

Vaibhav Gehlot had, meanwhile, been striking other deals.  In 2008, he started a company named Sunlight Tours and Travels. Last year, he sold half that company to  Ratan Kant Sharma, a director in Triton Hotels.

The Chief Minister denied allegations of corruption, and said,  "I have been against nepotism, favouritism. So there is no question of favouring my son.  There were no undue favours to the company in which my son works. No rules were bent." (Watch)

The BJP says its a question of probity. Party spokesperson Nirmala Sitharaman said that Gehlot was speaking as a father and not as a Chief Minister. She said, "He (the Rajasthan Chief Minister) cannot decide whether there was nepotism or not. We have been debating this in the context of Tamil Nadu and Karnataka. This calls for a complete investigation and the CBI should be asked to investigate."(Watch)

Promoted
Listen to the latest songs, only on JioSaavn.com
She also said that we need to have "transparent and accountable governments".

Delhi, Haryana Ministers' 'What About Your State' Barbs On Covid Cases