Nitin Patel's name had been circulating as a candidate to replace Vijay Rupani, who resigned as Gujarat Chief Minister on Saturday. 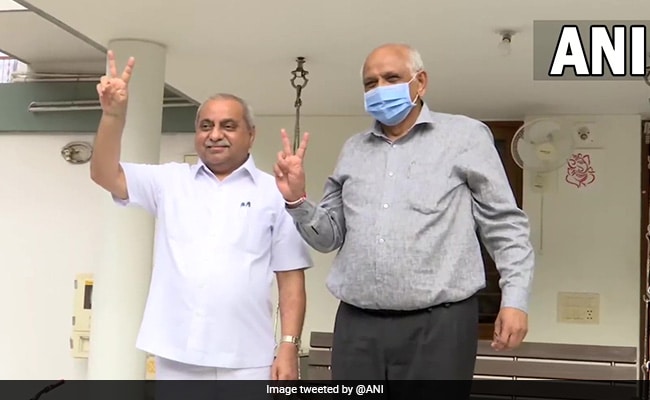 Nitin Patel was being seen as one of the top contenders for the chief minister's post.

As Gujarat prepares for a new Chief Minister and cabinet, former Deputy Chief Minister Nitin Patel, who was reportedly expecting the top job, has kept up a riveting sideshow with his comments ranging from defiance and denial to grudging acceptance. Hours before Bhupendra Patel's oath ceremony, Nitin Patel appeared tearful and emotional.

Nitin Patel's name had been circulating as a candidate to replace Vijay Rupani, who resigned as Gujarat Chief Minister on Saturday in an unexpected move by the BJP. Nitin Patel, who belongs to the powerful Patidar community, had even dropped heavy hints. But another Patel -- Bhupendra Patel -- emerged as the party's surprise choice.

"I'm not upset," Nitin Patel told news agency ANI, after Bhupendra Patel called on him in Ahmedabad this morning.

"I've been working in BJP since I was 18 and I will keep on working. Whether I get a position in the party or not, I will continue serving in the party," he said, describing the Chief Minister-designate as an "old family friend".

Then the cameras caught him teary eyed. "In politics you can remain big only if you make a place in people's hearts. A company's prestige lasts while its brand does it well. I am a six-term MLA, I could reach this point only with the support of voters," he said.

For Nitin Patel, this is not the first such disappointment. He had earlier been passed over when Vijay Rupani took charge.

On Sunday, as the BJP's choice became official, Nitin Patel remarked at a function he was not the only one to "miss the bus" and there were "many others like him".

He also declared that he had seen many ups and downs and nobody could throw him out as he lived in people's hearts.

"I am not bothered about speculation. Bhupendrabhai is our own. He invited me to inaugurate his office as an MLA. He is my friend. I don't care what people say or think. But, I am not in danger. Why? Because of you. I owe my existence to you" Mr Patel told a gathering at Mehsana.

Mr Patel had made his expectations clear when he said before the legislature party meeting that the new Chief Minister had to be "popular, strong, experienced, and the one who is known and acceptable to all".

That person turned out to be Bhupendra Patel for the party.

Mr Patel reportedly left the meeting early and was also not present when outgoing Chief Minister Vijay Rupani went with his successor to the Governor's house.

"There were many others who also missed the bus. I was not the only one. So do not look at this development in that way. It's the party which makes decisions," Mr Patel told reporters.

Asked why he left the legislators' meeting early, he said: "People indulge in wrong speculation. I had to attend this programme. I would have myself given it a pass if it was not of that much importance."

Mr Patel said he had received threats for his recent comment that the Constitution and secularism will last as long as Hindus are in majority. "I never say anything which can be discarded easily. I have always worked as a shield to protect the government, officers, Chief Minister and state BJP chief. I endured all the attacks but never hit back. I say what is right, even if many people do not like it" he said.