Maharashtra Police had on August 28 raided the homes of the prominent activists in several states and arrested at least five of them for suspected Maoist links.

The arrest of five rights activists had nothing to do with their dissenting opinion or difference in their political or other ideologies but was because of "serious criminal offences" and incriminating material, the Maharashtra police told the Supreme Court today.

A week ago, the Supreme Court had ordered house arrest of the activists till tomorrow - instead of police custody - and had stressed that "dissent is the safety valve of democracy".

In an affidavit or document responding to the petition of historian Romila Thapar challenging the arrest of the activists in connection with the Bhima-Koregaon clashes, the police cited evidence from the computers, laptops, pen drives and memory cards of the activists. The material "was shocking and clearly implicating" and revealed the activists not only as active members of the Communist Party of India (Maoist) but also a sinister design to destabilize the society.

"The contents also clearly reflect the preparation, planning and coordination...to carry out a violence, planned ambush/rebellion against the 'enemy' (which is our country and its security forces),"the police told the court. 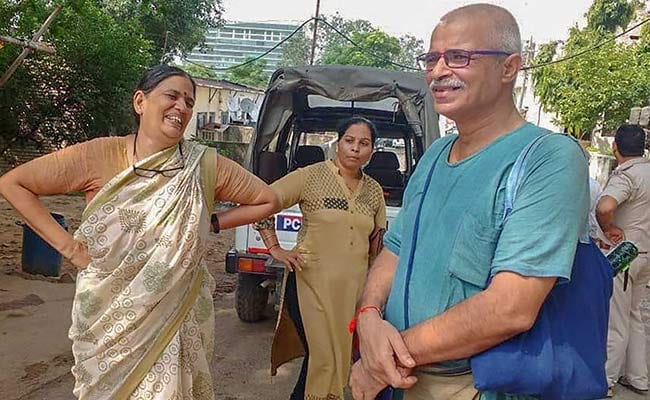 Sudha Bharadwaj is a US-born human rights lawyer and activist.

The court is not dealing with somebody's freedom of speech, freedom of conscience or freedom to hold and express views, the police said, referring to the petition by the activists.

"The court is dealing with persons against whom cogent evidence has come on record showing that they were active members of the banned terrorist organization namely, CPI [Maoist], and they are involved in not only planning and preparing for violence but were in the process of creating large scale violence, destruction of property resulting into chaos in the society..."said the police document.

The police allege that the activists, along with an "absconding underground accused", are a part of well-thought out criminal conspiracy and arranged a public meeting under the banner of 'Elgar Parishad'. "It appears clearly that 'Elgar' is a corrupted version of 'Yalgaar' which means 'the attack'," the affidavit said.

The police objected to keeping the activists in house arrest, as the Supreme Court had ordered last week. They said substantial damage must have been done by the accused while in house arrest to influence the investigation.

The police also questioned the status of the petitioners, Romila Thapar and economists Prabhat Patnaik and Devika Jain, sociologist Satish Deshpande and legal expert Maja Daruwala, and said they were "strangers" to the investigation.

The raids were carried out as part of an investigation into an event called Elgar Parishad, or conclave, on December 31 last year, which had later triggered violence at Bhima-Koregaon village.