The BJP has threatened to go to court tomorrow. "In Bengal, you can be killed for being a BJP worker and the body can be retrieved only after agitations," said BJP state chief Dilip Ghosh. 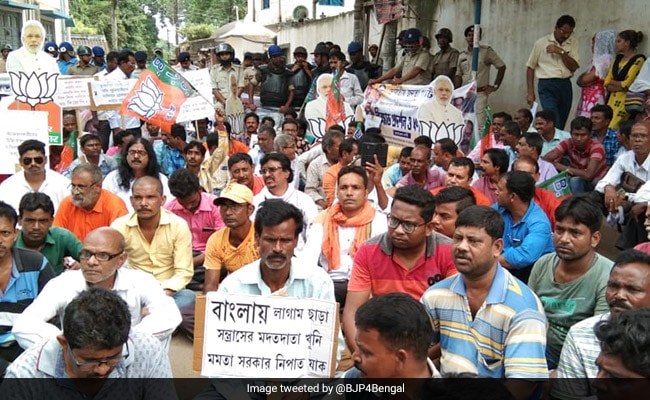 BJP workers blocked roads and set car tyres on fire at Bolpur in West Bengal's Birbhum district this evening to protest the "hijack" and "theft" by the police of the body of a BJP party worker who was shot at on Friday and died at a Kolkata hospital on Sunday.

Police brought Swarup Ghorai's body from Kolkata to Bolpur, 160 km away, late on Monday night, allegedly without the knowledge of the family. When the family went to the Kolkata hospital this morning and discovered the body was no longer at the morgue, they went to the local police station and filed a complaint.

The BJP has threatened to go to court tomorrow. "In Bengal, you can be killed for being a BJP worker and the body can be retrieved only after agitations," said BJP state chief Dilip Ghosh.

Trinamool Congress leader Firhad Hakim however said there was no "party role" in the matter and that it was an "administrative matter".

"The law will take its own course," he added.

Till late tonight, tension soared in Bolpur with BJP demanding the party be allowed to take the body in a procession for the funeral. Police refused the request.

On Monday, the family demanded custody of the body so they could take it to BJP's Kolkata head office for last respects. The police allegedly did not allow this, the family claimed. They were told the body had to be taken straight back to Nanoor, the victim's home town, for cremation.

The family did not agree. After they had left the hospital premises, police took the victim's body from state run NRS Hospital in Kolkata and to the government hospital at Bolpur late last night in an ambulance, with police escorts.

Trouble began on Friday night when Swarup Ghorai, 35, was tying BJP flags to lamp posts in his village Ramkrishnapur in Birbhum. That's when he was shot at by some miscreants, allegedly Trinamool supporters. Swarup Ghorai had recently quit the Trinamool Congress and joined the BJP.

He was first moved to a hospital in Burdwan and then to another in Kolkata.

There has been no official word from the Bengal police so far but sources said the decision of moving the body out of Kolkata to Bolpur was taken to avoid a law and order situation.