Both the BJP and the Left have slammed the Trinamool Congress and accused it of attacking their workers amid victory celebrations after the May 2 results. 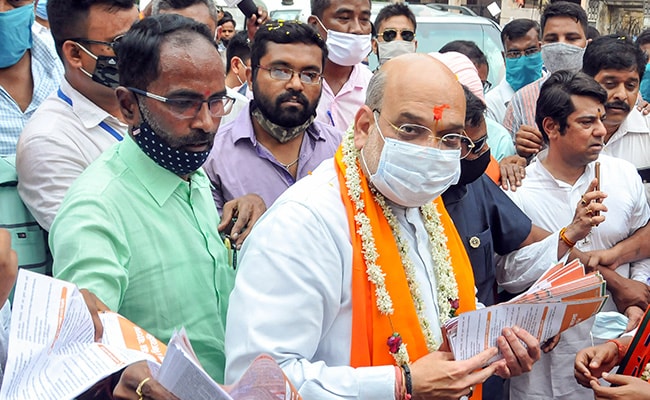 The Home Ministry, under Amit Shah, has pulled up the Bengal government. (File)

On a day West Bengal Chief Minister Mamata Banerjee was sworn in for a third term after a decisive win against the BJP, the Union Ministry of Home Affairs shot off another letter to the state government asking why it had not written back about measures taken to stop the violence after Sunday's election result.

"I remind you that no report has been submitted despite my asking for details on post-poll violence on May 3rd. Non-compliance of this second letter would be taken seriously," Union Home Secretary Ajay Bhalla said in the second letter dispatched to state government two days after he wrote the first letter.

Mr Bhalla also asked the West Bengal Chief Secretary why adequate measures to stop the violence have not been taken so far. "There are fresh reports which suggest that post-poll violence has not stopped. Immediate measures should be taken to stop violence and report regarding the same should be sent immediately," he wrote.

A four-member team of the Home Ministry, headed by an Additional Secretary, has been sent to West Bengal to assess the ground situation, government officials said.

The National Human Rights Commission (NHRC) on Wednesday also took note of the post-poll violence that erupted in West Bengal after assembly election results were announced on May 2. The human rights body had requested its Deputy Inspector General (Investigation) to constitute a team to look into the matter. The team has been asked to conduct an on-the-spot fact-finding investigation and submit it in two weeks.

"Considering as a fit case of an alleged violation of Right to Life of the innocent citizens, the Commission has today taken suo-moto cognizance of the matter and has requested its DIG (Investigation) to constitute a team of the officers of the Investigation Division of the Commission to conduct an on the spot fact-finding investigation and to submit a report at the earliest, preferably within two weeks," the NHRC said.

Both the BJP and the Left have slammed the Trinamool Congress and accused it of attacking their workers amid victory celebrations after the May 2 results.

The Trinamool Congress and the West Bengal Police have rebuffed most of the charges saying a large number of fake videos and images from older incidents were being spread on social media.

On Tuesday, BJP National President JP Nadda visited Bengal to meet the families of the victims assuring that justice will be served democratically. "Mamata ji, what your party has done after victory, shows how much you and your party workers believe in democracy. The TMC workers and the politician are claiming that the clips of these incidents doing the rounds on social media are nothing but fake news. I would like to request the media to tell the truth to the nation," said Mr Nadda.

Trinamool Congress leaders said they had nothing to do with any such incidents and urged people to maintain peace and follow COVID-19 protocols.