Bengal Governor Jagdeep Dhankhar interacted with those who had taken refuge in a camp at Agomoni area of Dhubri. 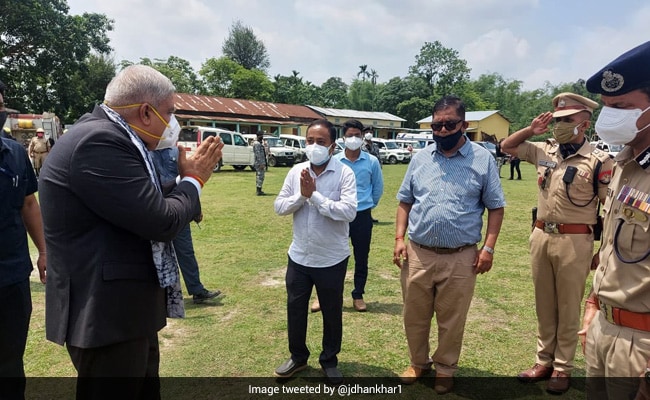 It is a matter of "shame" for West Bengal that its people are taking refuge in other states fearing violence, Governor Jagdeep Dhankhar said on Friday.

"Nothing can be more shameful for us than people of West Bengal taking shelter in other states," Governor Jagdeep Dhankhar said while visiting the areas of Assam bordering Bengal to meet people from the state camped there.

Mr Dhankhar interacted with those who had taken refuge in a camp at Agomoni area of Dhubri.

The Governor, who is involved in a running feud with Chief Minister Mamata Banerjee over law and order situation, said history will judge the bureaucracy of West Bengal, police and administration.

"History will judge the bureaucracy of West Bengal, police and administration... This is such an issue, where nobody has the right to play politics," Mr Dhankar told reporters.

"I do not understand till when will the tussle with the Governor, central forces, central government continue. I have seen that in Cooch Behar. I feel ashamed to speak to you on this. The people fear the police now, of going to the police station. The police is fearful of the ruling party karyakartas. I would not comment much as I am not in the land of West Bengal. My solidarity with Assam. I wish to convey this to the government of Assam," said the Governor.

Ignoring the advice of Chief Minister, the Governor visited Cooch Behar district on Thursday and accused the state government of not doing anything to contain the post-election violence.

"Even the media did not do anything. It is an open secret who the perpetrators were," he said.

Asked about the law and order situation in the state, the Governor said that he was not in favour of confrontation but champions cooperation.

"We are heading in a wrong direction and there can be a point of no return... the state of West Bengal is witnessing two big issues - Covid pandemic and post-election retributive violence," he said.

The Trinamool Congress leadership and the State government spoke against the Governor's visit to areas in north Bengal.