Governor Driven Out Of Calcutta University Event For Abhijit Banerjee

The 30 odd minutes that Bengal Governor Jagdeep Dhankhar spent at the convocation venue were spent inside a guest room back stage. 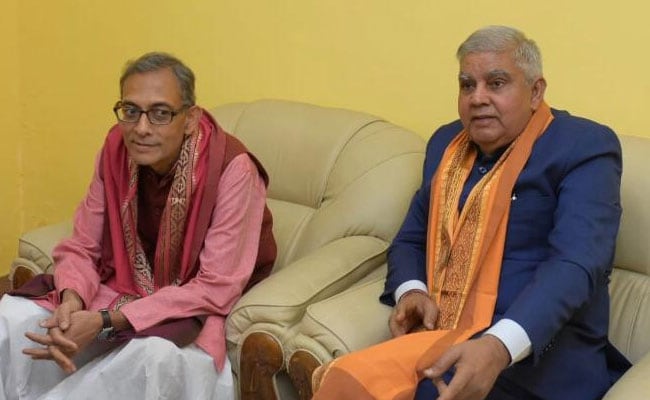 This is the second time Bengal Governor Jagdeep Dhankhar has run into protests at a convocation.

Students at the Calcutta University shouted "go back" slogans against Bengal Governor Jagdeep Dhankhar and forced him to leave the convocation without even stepping on stage.

The 30 odd minutes that the governor spent at the convocation venue were spent inside a guest room back stage with laureate Abhijit Vinayak Banerjee.

The honorary doctorate Calcutta University gave to Nobel laureate Abhijit Banerjee was ultimately conferred not by the Governor who is chancellor but by the vice chancellor instead.

The chief minister did not go to the convocation.

This is the second time the governor has run into protests at a convocation. On 24 December, he was prevented from.reaching the convocation venue at Jadavpur University by an association of University employees who blockaded him at the gate.

The convocation begun only after he drove out of campus after sitting for almost an hour at the blocked gate.

Today, he reached the venue but could not reach the stage. Till the students stopped shouting slogans, Dr Abhijit Banerjee was also backstage. He came on stage only after the ceremonial proceedings had begun

It is not clear yet if Dr Banerjee and the Governor were seated in the same guest room backstage.

As Governor sat in the guest room and the slogan shouting continued inside the auditorium of Nazrul Manch where the special convocation was being held, Vice Chancellor Sonali Chakravarty Bandhopadhyay pleaded with students to let her confer the honorary D Litt on Abhijit Banerjee, assuring them that the Governor would not come on stage.

Governor Dhankhar, as Chancellor of the university was to preside over the convocation. Chief Minister Mamata Banerjee skipped the event and was seen at an art camp organized in protest against the citizenship law CAA.

The Governor and Mamata Banerjee have been feuding for months and quite openly, in the form of public putdowns and snubs from both sides.

The Chief Minister and her Trinamool Congress accuse Mr Dhankhar of acting like a BJP stooge.

He has also been at the receiving end of anger against the new religion-based citizenship law that seeks to grant Indian citizenship to non-Muslim minorities from three neighbouring countries, Pakistan, Afghanistan and Bangladesh, if they escaped religious persecution and entered India before 2015.

Ms Banerjee has taken out several protest marches against the citizenship law.

He had also praised the Nobel-winning economist and said he was "proud" to be associated with the decision to honour him a chancellor of Calcutta University.