The BJP leaders also apprised PM Narendra Modi of the growing support base of the party in Bengal. 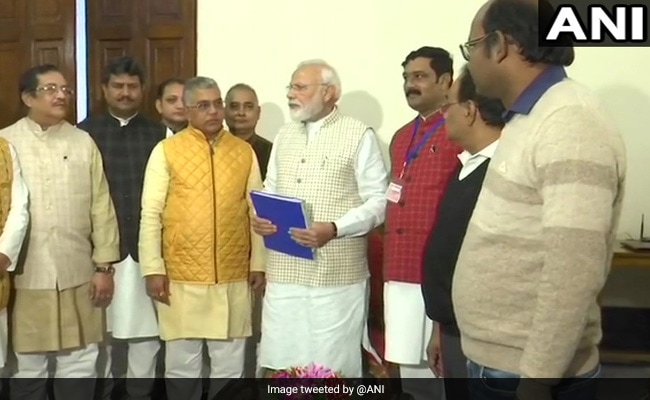 A BJP delegation led by Bengal BJP president Dilip Ghosh on Saturday met Prime Minister Narendra Modi and apprised him of the party's efforts to spread awareness in the state about the recent changes in the citizenship law and their "imperatives" for the country.

The delegation, which also included the party's national general secretary Kailash Vijayvargiya, updated the prime minister of the party's campaign in favour of the Citizenship (Amendment) Act, 2019, aimed at removing people's misgivings against the law, said a senior party leader.

"We had a very good meeting with the prime minister. We showed him photographs of massive rallies that are taking place across the state in support of the CAA," he said.

The party leaders also apprised PM Modi of the growing support base of the party in the state.

Black flags and angry chants of "Modi, go back" greeted the prime minister as he arrived in Kolkata on a two-day visit on Saturday but nicety was not abandoned as Chief Minister Mamata Banerjee shared dais with him while remaining insistent on annulment of the new citizenship law.

Ms Banerjee, arguably the most bitter critic of the prime minister on the CAA, met him at Raj Bhavan, after deciding not to receive him at the airport, and also shared stage at a colourful programme to celebrate 150 years of the Kolkata Port Trust.

The meeting assumes significance as the new citizenship law has emerged as the latest flashpoint in the state, with Ms Banerjee's Trinamool Congress opposing the contentious legislation tooth and nail, and the BJP pressing for its implementation.