Ashok Chavan cited a South Central Railways communication dated April 13 regarding special trains for migrants, saying it could have triggered the gathering at Bandra. 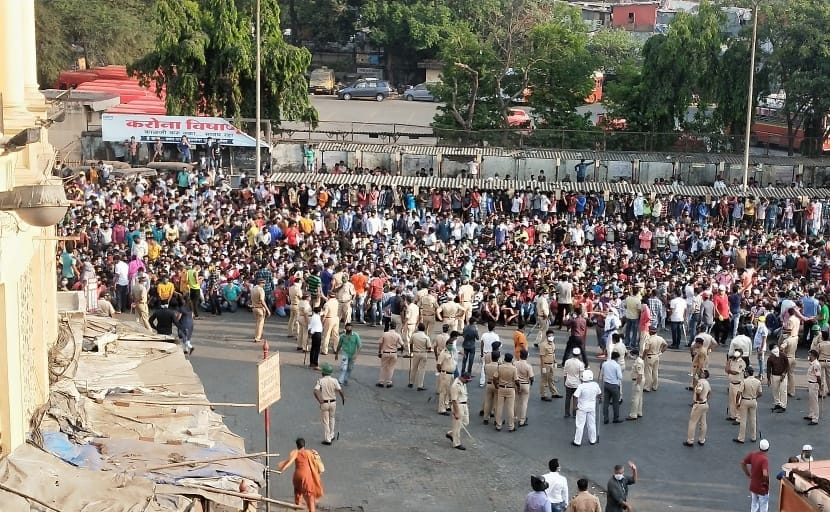 Alleging a political conspiracy to impose President's rule in Maharashtra, the Congress on Wednesday demanded a thorough probe into the gathering of migrants at Mumbai's Bandra Railway Station.

He said the incident is an attempt to disrupt communal harmony in the state and negate the state's efforts in fighting coronavirus.

Addressing a press conference through a video link, Mr Chavan said the police is investigating the matter to ascertain who is behind the instigation of migrants, and the guilty will be punished.

Chaotic scenes were witnessed at the Bandra Railway Station on Tuesday, after a large number of migrant workers gathered there forcing the police to resort to lathicharge to disperse them.

Migrant workers have been stranded at various places, including at state borders, ever since the nationwide lockdown was imposed on March 24 to curb the spread of coronavirus.

The Congress also asked the centre to probe the alleged role of the railway ministry in the Bandra incident.

Ashok Chavan cited the April 13 letter by deputy chief commercial manager of South Central Railways in Secunderabad which stated that "Jansadharan Specials" will be run to clear stranded migrant workers.

Asked if he saw a conspiracy behind the Bandra gathering, the Maharashtra minister said, "The matter is being investigated. The chief minister has made a statement that this matter is going to be investigated."

He added that social media is already trying to play out this matter, putting the entire blame on the state government authorities.

"I think we all know who is patronising the social media people in the country. There was this trending news in the social media about imposition of President's rule in the state of Maharashtra which certainly reeks of a political conspiracy. As you can see, this is not a time to play politics. Let us first investigate it and this is a very serious incident," he noted.

"... there are some people behind this who want to disturb the communal harmony in Maharashtra, disrupt the efforts taken by the government to prevent coronavirus and create a very difficult situation," Mr Chavan said.

The Congress also questioned the central government on why railway bookings continued during the lockdown.

"After all, why does every disaster break on the poor and the workers? Why are decisions not taken with them in consideration? Why are they left to depend on God? Why was booking of railway tickets allowed to continue during the lockdown?" Priyanka Gandhi said.

She asserted the workers were the backbone of the country and the government should help them reach their villages.

"Why were special trains not arranged? They have run out of money and their stock of ration. They are feeling insecure and want to go home. Arrangements should have been made for them. They can still be helped with proper planning," the Congress general secretary said in a tweet in Hindi.

Congress leader Ahmed Patel also called for probe into the alleged role of the railway ministry behind the crisis among the migrants.

"Why were train services abruptly stopped leaving migrants stranded? Why was the railways accepting bookings despite no clarity on lockdown extension?" he asked.

The state, he said, has identified 30 hospitals for treatment of coronavirus infected patients and made availability of 2,305 beds. Besides, the PWD department has identified 22,000 places where 55,000 beds are available, he said.

Maharashtra Revenue Minister Balasaheb Thorat, who is also the PCC chief, said the state government is providing ration to 7.5 crore people through the Food Security Act.

He said the state is also providing food to 7 lakh poor and vulnerable people everyday.