The Hindu Sena has demanded that Babar Road be renamed after a "great Indian personality". 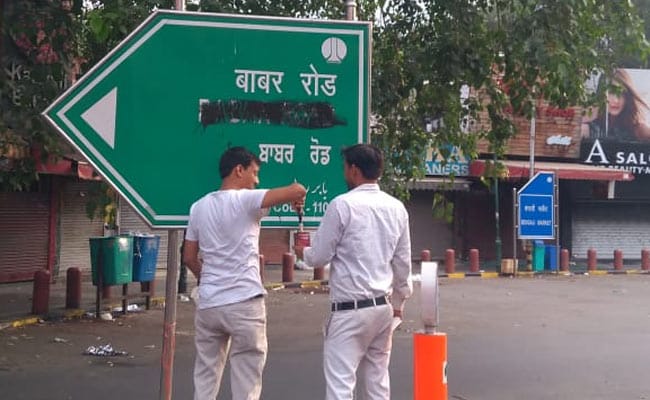 The signboard for Delhi's Babar Road was blackened by members of Hindu Sena.

A signboard for Babar Road at central Delhi's high-security zone was blackened by members of a right wing group Hindu Sena, who said they want the road's name to be changed.

Located in the heart of Delhi, close to the iconic Connaught Place, Babar Road is named after was the first emperor of the Mughal dynasty in India.

The Hindu Sena has demanded that it be renamed after a "great Indian personality".

"We demand that the government rename the road, which is after a foreign invader, to some great Indian personality. Hence, we have blackened the road signage erected by the New Delhi Municipal Council," said Hindu Sena president Vishnu Gupta was quoted as saying by news agency PTI.

It was not clear what action authorities are planning to take against the act of vandalism.

Officials of the NDMC, which is responsible for the road's maintenance, were not immediately available for comment.

Last year, Delhi's Akbar Road, one of the most breathtaking, tree-lined streets in the capital, was briefly "renamed" as a signboard was overnight covered with one reading "Maharana Pratap Road".

The yellow and pink poster, apparently put up by vandals, was removed from the signboard under police supervision.

The iconic road, named after Mughal emperor Akbar, Babur's son, is home to some of the top politicians in the country and also the Congress party headquarters.

In 2015, the name of another prominent road named after Akbar's great-grandson Aurangzeb, whose legacy is far from glorious was changed.

The next year, the Prime Minister's street, Race Course Road, was changed to Lok Kalyan Marg.