In a unanimous verdict, the Supreme Court today said the 2.77 acres of disputed land will go to a government-run trust to build a temple, while Muslims will be given a "suitable" five-acre plot in the town. 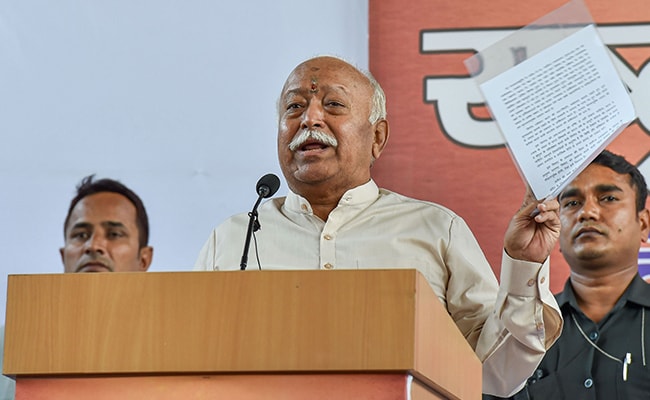 Mohan Bhagwat -- chief of the BJP's ideological mentor Rashtriya Swayamsevak Sangh -- today welcomed the Supreme Court verdict in the century-old Ayodhya dispute, and said, "We will all build the temple together".  The top court, in a landmark judgment in the politically sensitive case this morning, had said the 2.77 acres of disputed land in Ayodhya will be handed to a trust for the building of a temple, while 5 acres of land at an alternate site will be given for a mosque.

"That Hindus consider Ayodhya as the birth place Lord Ram is undisputed. Belief is beyond judicial scrutiny," the court said. Awarding an alternate plot for a mosque, it also said, "Constitution does not distinguish between belief and faith of one religion and others".

"We welcome the top court's decision (on Ayodhya dispute) and things will happen according to procedure," he said.  "We wanted the issue to end, this has happened. All sides (of the case) were evaluated and truth and justice have been highlighted," he told reporters at a media conference.

A 16th Century mosque that stood at the disputed site was razed in 1992 by right-wing activists who believed that a temple marking the birthplace of the Lord Ram had to make way for the mosque built by Babar.

Right-wing groups have long been demanding that a temple be built at the site. Ahead of the general election that took place earlier this year, there was even a demand that the government bypass the legal process and facilitate the building of a temple through an ordinance or executive order.

Asked if the RSS would now take up the cases of the Mathura and Varanasi temples, Mr Bhagwat said the job of the RSS is "not launching agitations but building character".

Right-wing groups have often called for an Ayodhya-like agitation in Mathura and Varanasi, two other pilgrim towns where they object to the existence of mosques along with temples.