Ayodhya verdict: Sunni Waqf Board to appeal in Supreme Court 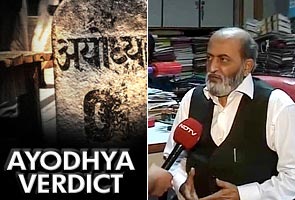 Lucknow: The Sunni Waqf Board says it will appeal in the Supreme Court against the Ayodhya verdict delivered today in Lucknow.

The Waqf board - one of the main litigants - says it doesn't agree with the decision. "High Court's formula of one-third land is not acceptable to the Waqf Board and it will appeal against it in the apex court," said Zafaryab Jilani who represented  the Waqf Board in court.

Jilani said that the Sunni Board is open to any negotiated settlement on the issue.

Promoted
Listen to the latest songs, only on JioSaavn.com
Jilani said the Board has time to appeal in the Supreme Court as the judgement orders status quo for the next 90 days.

"The Board will move the apex court after a meeting of the All India Muslim Personal Law Board. We are not in hurry as we have 90 days' time to appeal as a matter of right," Jilani said.