Attack On Asaduddin Owaisi: Court Asks UP To Respond To Bail Challenge

The AIMIM chief's car had come under attack in Hapur while he was returning to Delhi after attending election-related events in western Uttar Pradesh on February 3. 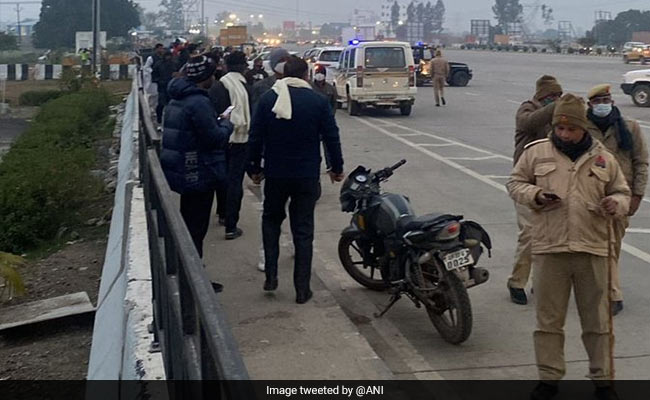 Asaduddin Owaisi has challenged bail granted to two accused of firing at his vehicle.

The Supreme Court Friday sought the response of the Uttar Pradesh government on a plea by AIMIM President Asaduddin Owaisi challenging the bail granted to two persons who are accused of firing at his vehicle in February this year.

A bench of Justices MR Shah and Krishna Murari issued notices to the State of Uttar Pradesh and the two accused -- Sachin Sharma, and Shubham Gurjar -- on the limited issue whether the matter relating to bail granted to them be remanded back to the Allahabad High Court for fresh consideration.

It dismissed the challenge to the bail granted to the third accused, Aalim.

"So far as the order of the high court releasing the respondent (Aalim) is concerned, the role attributed to him and the allegations are that before six months (of the incident), he supplied the pistol and no role is attributed to him with respect to any fire shot....We see no reason to interfere with the high court releasing the said accused on bail. The SLP relating to Aalim's bail is dismissed," the bench said.

The All India Majlis-e-Ittehadul Muslimeen (AIMIM) chief's car had come under attack in Hapur while he was returning to Delhi after attending election-related events in western Uttar Pradesh on February 3, a week before assembly polls began in the state.

Later, the police arrested three persons -- Sachin Sharma, Shubham Gurjar, and Aalim -- for their alleged involvement in the incident.

Mr Owaisi, in his petition before the top court, challenged the bail granted to them on the ground that this was a classic example of a disproportionate amount of prejudice and hate-related crimes, leading to the incident of an attempt to murder and the target was a known Member of Parliament.

In his plea, filed through advocate MR Shamshad, Mr Owaisi has submitted that after accused Sachin came out on bail, he again threatened the petitioner with serious consequences.

"The said statement made in public is grave and requires to be taken into cognisance. More importantly, the accused has not denied his involvement rather it appears that he is taking pride in undertaking this crime," the plea said, adding that Mr Owaisi was the victim of the incident of an attempt of murder on February 3, 2022, by the accused whose action was recorded in CCTV footage which was now part of the charge sheet.

After the arrest of the accused, the police said that two pistols were seized from their possession and a Maruti Alto car has also been impounded in connection with the case.

The FIR was lodged at the Pilakhua Police Station under various provisions of the IPC, including Section 307 (attempt to murder).