The massive Kumbh Mela in Prayagraj, formerly Allahabad, has turned into an echo chamber for powerful Hindu groups to push for a Ram temple in Ayodhya. 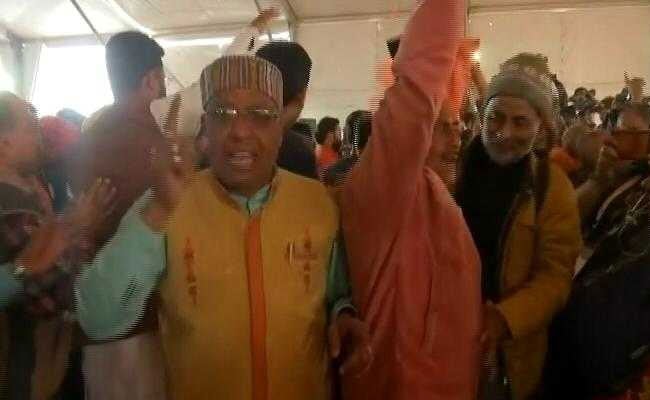 The agitating crowd was evicted by VHP members, but not before coming to blows.

Delegates at a dharma sabha or religious gathering organised by the Vishwa Hindu Parishad at the Kumbh Mela in Uttar Pradesh's Prayagraj came to blows with the right wing organisation's members today over the issue of the construction of a Ram temple in Ayodhya.

The incident happened right after RSS chief Mohan Bhagwat's speech at the dharma sabha, where he suggested that the construction of the temple would have to wait for a few more months.

This riled sections of the crowd, mostly Hindu religious leaders and their followers, who got up from their seats and started asking for a concrete date for temple construction. They were eventually evicted by VHP members, but not before coming to blows.

"We want to do something within a year, we want that temple construction should start. If something happens before four to six months, it's good, if not then it will certainly happen after four to six months", Mr Bhagwat had earlier told the crowd of about 5,000 people, also stressing that it was only PM Narendra Modi's government that was interested in working for the temple at Ayodhya.

The massive Kumbh Mela in Prayagraj, formerly Allahabad, has turned into an echo chamber for powerful Hindu groups to push for a Ram temple in Ayodhya. This is not the first time the VHP is organising a large gathering to discuss their way forward for the temple, but that they are meeting at the Kumbh Mela with the temple as their focus is seen as significant.

Swaroopanand Saraswati, the head of the Dwarka Sharda Peeth, also held a meeting at the Kumbh earlier this week and called a march to Ayodhya on February 21, to lay the foundation stone for the Ram Temple. "Until the High Court's order is cancelled by the Supreme Court, it is still applicable.  Lord Ram lives there and that's his birthplace," he told reporters, referring to an order by the Allahabad High Court that is on hold by the top court.

The government led by PM Modi has said any legislative route to build the temple is possible only after the court case on the title suit is settled.

On Tuesday, the centre asked the Supreme Court that surplus land acquired by the government in 1993 around the disputed site, where the Babri mosque stood, may be returned to the original owners.

A large part of this surplus land is claimed by the Ram Janmabhoomi Nyas or the trust overseeing the Ram temple plan.