The AAP's score matched the Akali Dal's figure of 92 from the 1997 election.

AAP will now form its second government in the country after the one led by Arvind Kejriwal in Delhi.

The Aam Aadmi Party on Thursday swept Punjab, winning 92 of the 117 Assembly seats, in a record second to only that of an Akali Dal-BJP joint tally in 1997. The AAP's score matched the Akali Dal's figure of 92 from that election.

While AAP scored three-fourths of the seats, the Congress won 18, SAD 3, BJP 2 and BSP 1. An Independent also emerged victorious.

AAP will now form its second government in the country after the one led by Arvind Kejriwal in Delhi. 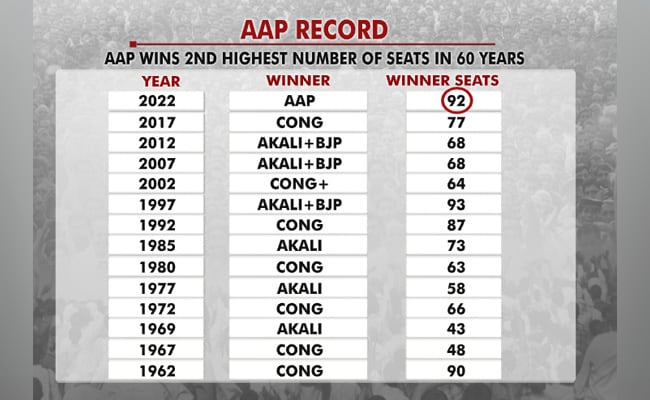 AAP's score was the second-highest number of seats won by a side in Punjab in 60 years.

Mr Kejriwal hailed the party's performance in Punjab as a "revolution" while his party leader Raghav Chadha said AAP will emerge as the replacement of the Congress at the national level in the coming days.

Mr Channi was trumped by AAP's Labh Singh Ugoke with a margin of 37,558 votes from Bhadaur. He also lost from Chamkaur Sahib, where he was defeated by AAP's Charanjit Singh by a margin of 7,942 votes.

In the 2017 Punjab assembly elections, the Congress had ended the Akali Dal-BJP's 10-year rule by scooping up 77 seats. The AAP had got 20 seats while the Akali Dal-BJP alliance had won 18 seats and two seats went to the Lok Insaaf Party.

The BJP, which used to be a junior partner during its alliance with the SAD, fought this election with the Amarinder Singh-led Punjab Lok Congress and Sukhdev Singh Dhindsa-led SAD (Sanyukt).