At 13, she's a senior student at Lucknow University 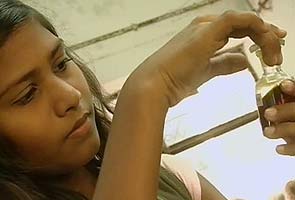 Sushma Verma, 13, is the youngest student ever to pass the Class XII Board exam.

Lucknow: At an age when she should be in school, the 13-year-old daughter of a poor labourer in Uttar Pradesh has baffled everybody by galloping to a master's programme in microbiology.

Sushma Verma was the youngest ever to pass class 12 exams, at just over 9 years. Now the teen prodigy has finished her graduation and has been named in the merit list for microbiology at the Lucknow University. She begins her master's classes next week.

Behind her remarkable success lies the story of a family determined to educate their children, no matter what it takes.

Sushma's father Tej Bahadur Verma, a daily wage labourer, earns barely two hundred rupees a day to feed a family of five. But when he saw his daughter's name on the merit list, he paid the initial fee of Rs 25,000 instantly, not thinking about the rest - at least 75,000 rupees - to be paid later.

The family had to sell their land to pay for Sushma's education.

At their one-room home in Lucknow, their most precious possessions are a study table and a second-hand computer.

"I think education is important for my children, so I didn't hesitate in selling the land. We never got the chance to study - I don't want my children to work as labourers, I will do whatever I can to educate them," says Verma.

It took three years of college for Sushma to get used to studying with "big boys and girls". "At first, it was intimidating but everyone was really nice to me, so I was okay," she smiles.

Many at her college are shocked to see a senior who looks little more than a schoolgirl.

"She is much younger, but I will give her the respect any senior deserves," said Renu Rathore, a third year science student and a year 'junior' to Sushma.

Sushma wants to be a doctor and tried for medical college after school but was just too young. Now she plans to give her dream another shot when she turns 18. Age, she says, is just a number.

If you would like to make a donation to help Sushma, here are the details of her bank account:

Promoted
Listen to the latest songs, only on JioSaavn.com
Note:This information has been provided / published on a good faith basis, without any commercial motive. NDTV does not vouch for the authenticity of the claims made by the intending done, nor can we guarantee that the donations made by a donor will be used for the purpose as stated by the intending donee. You are requested to independently verify the contact information and other details before making a donation. NDTV and/or its employees will not be responsible for the same.