Assembly Election 2019 Updates: While polling for the assembly elections in Andhra, Arunachal and Sikkim will complete in a single-phase today, voting for the Odisha Assembly will be held in four phases - first being today - coinciding with the four phases of the Lok Sabha elections in the state. 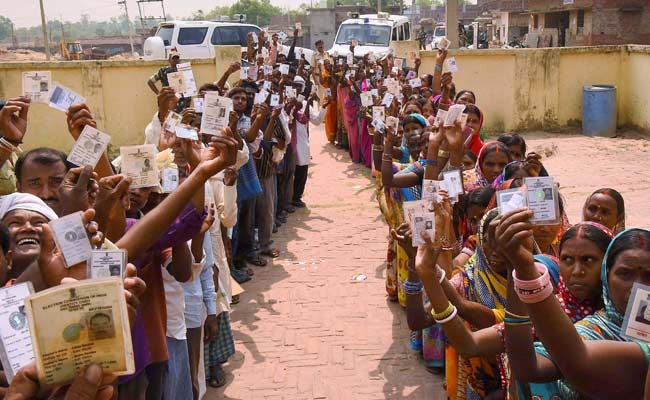 Here are the LIVE updates from the 2019 Assembly elections in Andhra Pradesh, Arunachal Pradesh, Sikkim, and Odisha:

Elections 2019: Widespread Clashes In Andhra Pradesh Over Elections, TDP Worker Dead
Andhra Pradesh witnessed violence in at least four constituencies during today's polling, in which at least one person died. Supporters of Chandrababu Naidu's Telugu Desam Party and rival YSR Congress Jaganmohan Reddy came to blows as elections for the 175 assembly seats and 25 Lok Sabha seats in the state got underway today.
Apr 11, 2019 22:42 (IST)
Polling In Andhra Pradesh Continues Even After 10pm

Polling continued in some polling centres in Andhra Pradesh past 10 pm Thursday as voters stood in long queues waiting for their turn to exercise their franchise
Apr 11, 2019 22:33 (IST)
Arunachal Pradesh Records 66% Voter Turnout

An estimated 66 per cent of the voters in Arunachal Pradesh exercised their franchise on Thursday to elect members of the state Assembly and the two Lok Sabha MPs, an election official said 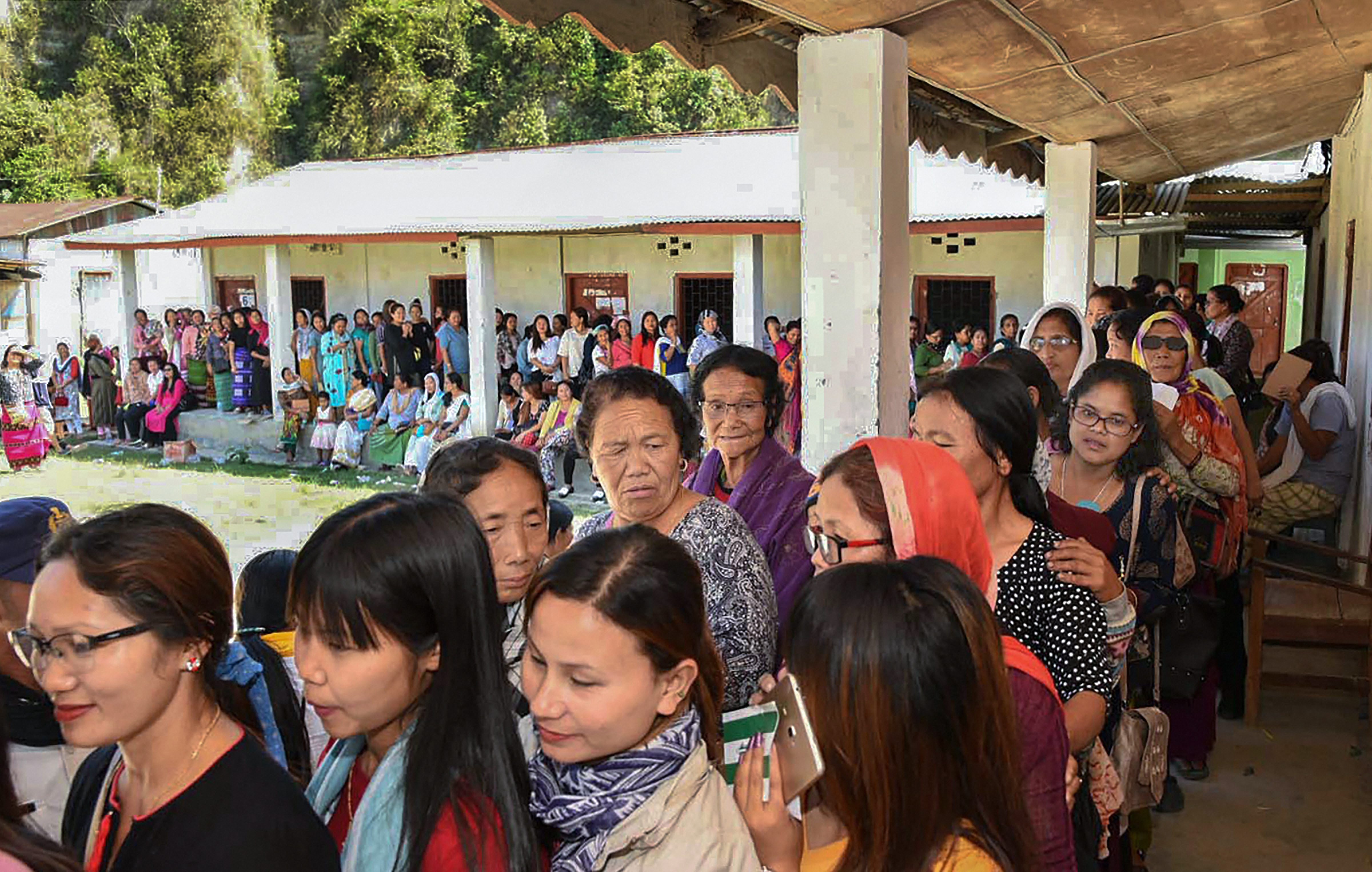 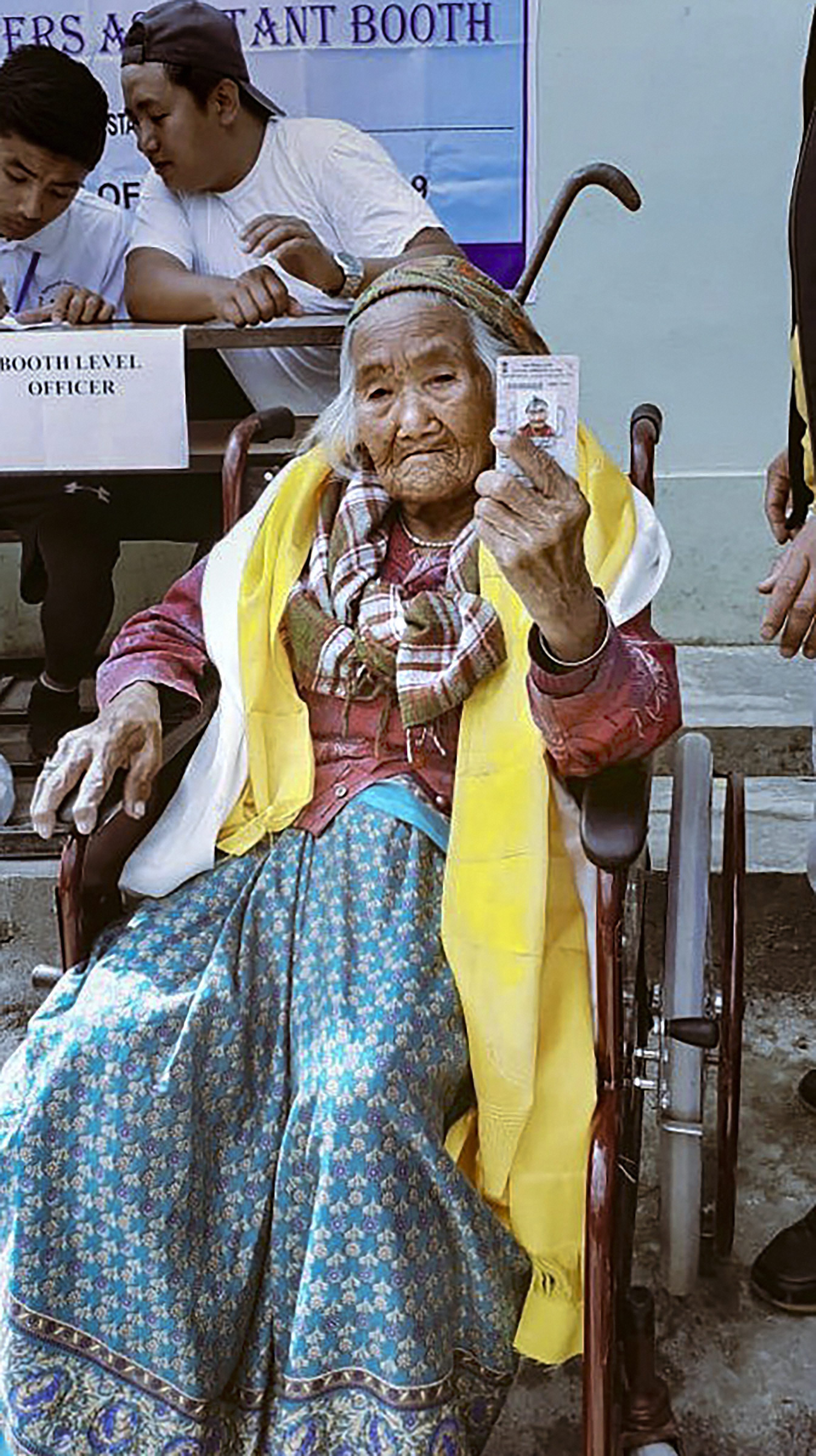 An estimated 74 per cent of the voters in Sikkim have exercised their franchise on Thursday to elect members of the state Legislative Assembly as well as the lone Lok Sabha MP from the state, an election commission official said. Surendra Kumar, Chief Electoral Officer, Odisha: We have been successful in conducting the first phase of polls in a free, fair & peaceful manner. There has been no untoward incident whatsoever reported in the polls. The failure rate of EVMs has been under 1%. #IndiaElections2019pic.twitter.com/xVcjNXaIyr

Odisha: Electronic Voting Machines (EVMs) & VVPATs being packed at a polling station in Kalahandi after voting concluded there. #LokSabhaElections2019pic.twitter.com/wNEfbbn3bn

Kakinada, East Godavari district, Andhra Pradesh: Man carries his elderly father in his arms to the polling station in the area to let him cast his vote for the state assembly elections and #LokSabhaElections2019pic.twitter.com/pCe75wfZ1U

Kakinada, East Godavari district, Andhra Pradesh: Man carries his elderly father in his arms to the polling station in the area to let him cast his vote for the state assembly elections and #LokSabhaElections2019pic.twitter.com/pCe75wfZ1U

Andhra Pradesh: A YSRCP worker has been taken to a hospital after he was injured in a clash which broke out between YSRCP and TDP workers at a polling station in Jammalamadugu Mandal of Kadapa district today. #IndiaElections2019#AndhraPradeshElections2019pic.twitter.com/JTQ0c7AnWL

Biju Janata Dal (BJD) writes to Chief Electoral Officer, Bhubaneswar, over violation of EC guidelines by BJP for holding press meet today and details of the same being provided on scrolling news on OTV. We demand strict action be taken against BJP, its leaders & OTV. #Odishapic.twitter.com/Kg59HPDCd1

#WATCH Andhra Pradesh: A clash broke out between workers of TDP and YSRCP at a polling station in a village of Jammalamadugu Mandal in Kadapa district today. One injured YSRCP worker has been taken to hospital. #IndiaElections2019#AndhraPradeshElections2019pic.twitter.com/VsTeFpNtXv

Apr 11, 2019 13:32 (IST)
Andhra Pradesh Assembly Election 2019 LIVE: 1 Dead In Poll Violence
A Telugu Desam Party member died after clashes between the TDP and the YSR Congress in Tadipatri Assembly constituency in Anantapur district. TDP's Siddha Bhaskar Reddy died in the clashes.
Apr 11, 2019 13:12 (IST)
Odisha Assembly Elections 2019 LIVE: 22% Voter Turnout In 4 Hours
Nearly 22 per cent of the 60.03 lakh voters cast their ballots in the first four hours of polling today for the four Lok Sabha and 28 Assembly seats in Odisha in the first phase, an election officer said. Braving the scorching sun, people were seen making a beeline outside the polling booths to cast their rights. 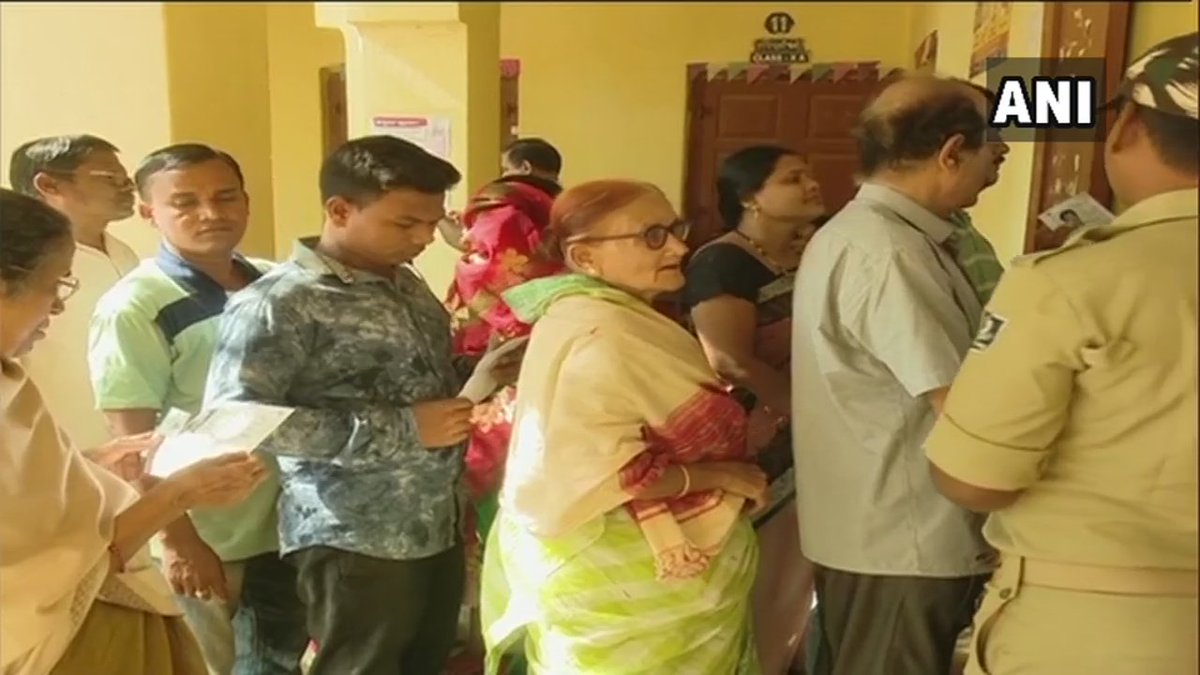 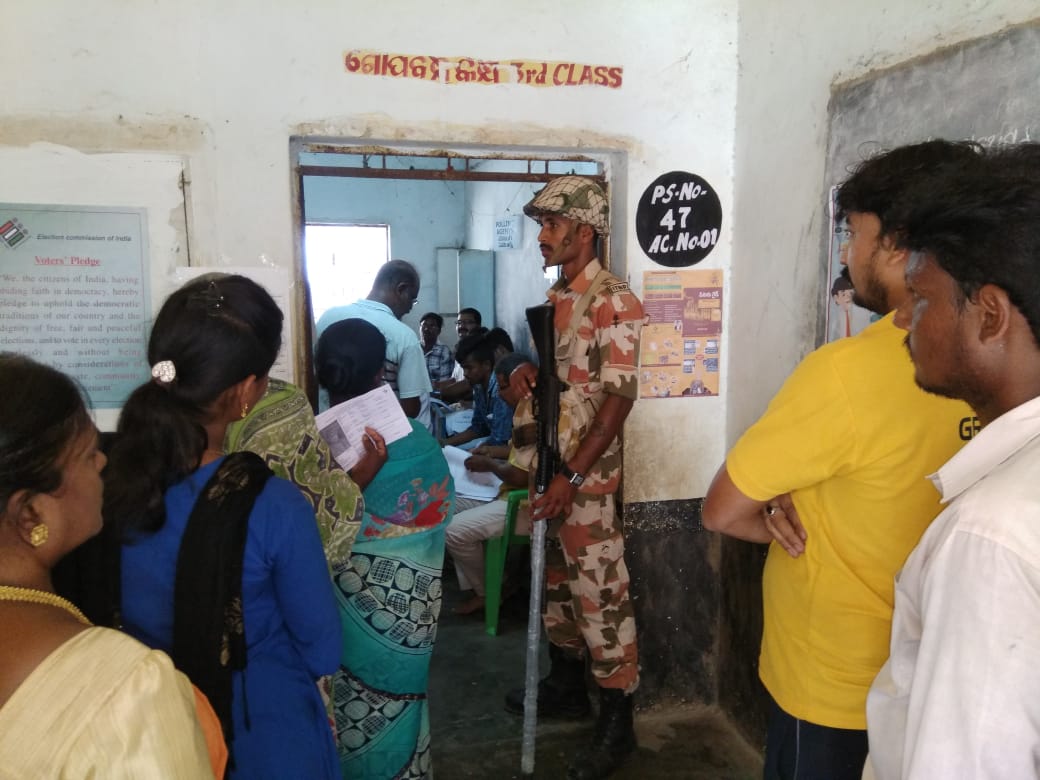 Hyderabad: Tollywood actors Naga Chaitanya and Samantha arrive at a polling station in Nanakramguda, Gachibowli to cast their vote for #IndiaElections2019pic.twitter.com/oFLiit6CTj

Apr 11, 2019 12:22 (IST)
Sikkim Assembly Election 2019 LIVE: 11% Polling Observed Till 10 AM
An estimated 11 per cent voters exercised their franchise in the first three hours of polling in 32 legislative assembly constituencies and the lone Lok Sabha constituency in Sikkim. There has been no report of any untoward incident till 10 am, the office of the chief electoral officer (CEO) in the state said. Polling is being held in 567 polling stations spread across four districts in Sikkim.
Apr 11, 2019 11:33 (IST)
Odisha Assembly Elections 2019 LIVE: 15% Voting Recorded In First 3 Hours Of Polling
Around 15 per cent voting was recorded in the first three hours as polling was underway in four Lok Sabha seats and 28 assembly constituencies in the first phase of polls in Odisha today. Long queues of voters were seen at polling stations in Koraput, Kalahandi, Nabarangpur and Berhampur Lok Sabha constituencies and 28 assembly segments.

#LokSabhaElections2019: Voting underway at a polling station in Berhampur in Odisha pic.twitter.com/Vc6WExDuf6

N Chandrababu Naidu in letter to CEC: Likely that many voters who returned may not come back for voting even if polling is resumed after replacement / repair of existing EVMs.Therefore repolling needed in all polling stations where polling had not commenced upto 9.30am (file pic) pic.twitter.com/tfEmyIQ8YE

YSRCP chief @ysjagan shares a light moment with voters in his constituency Pulivendula; plays with a baby who accompanied her parents

He is contesting from the same assembly constituency#ElectionsWithNDTV#AndhraPradesh

Apr 11, 2019 10:12 (IST)
Andhra Pradesh Assembly Election 2019: Chandrababu Naidu Unhappy Over EVM Glitches
Andhra Pradesh Chief Minister and Telugu Desam Party (TDP) President N Chandrababu Naidu expressed his unhappiness over Electronic Voting Machines (EVMs) not functioning at several polling booths. Mr Naidu told the media in Amravati that polling was delayed at several places as the EVMs were not functioning. He said an EVM was not working where Chief Electoral Officer Gopal Krishna Dwivedi went to cast his vote.
Mr Naidu said at least now the Election Commission should review its stand on EVMs. "We have long been saying that there is scope for technical problems and manipulation in EVMs. Even technologically advanced countries are using ballot papers," the TDP chief said.
He said 22 political parties in the country demanded that at least the Voter Verifiable Paper Audit Trail (VVPAT) slips be counted. He did not agree with the Election Commission that counting of all VVPAT slips will take six days.
Apr 11, 2019 10:12 (IST)
A Jana Sena Party candidate in Andhra Pradesh was arrested on Thursday after he broke an Electronic Voting Machine or EVM on Thursday as polling for the Lok Sabha and assembly elections began in the state. Madhusudan Gupta threw the EVM on the floor at a polling station in the Guntakal Assembly constituency of Anantapur district, the police said. Mr Gupta, who had come to cast his vote at the polling station in Gutti, was angry with the polling staff over names of assembly and parliament constituencies not being displayed properly, news agency IANS reported.

Apr 11, 2019 10:05 (IST)
Arunachal Pradesh Assembly Elections 2019 LIVE: 6% Voter Turnout Till 9 AM
An estimated six per cent voters voted today in the first two hours of polling in Arunachal Pradesh. Simultaneous polls are being held in Arunachal Pradesh to decide the fate of 181 candidates for 57 assembly seats and 12 candidates for two Lok Sabha constituencies in the state. Additional Chief Electoral Officer Kangki Darang said an estimated six per cent electors cast their votes till 9 am.
Apr 11, 2019 09:47 (IST)
Odisha Assembly Elections 2019: Women Voters Outnumber Men In Today's Constituencies
Over 60 lakh voters in Odisha, including more than 30 lakh women, are voting today in the first phase of polls for four Lok Sabha and 28 assembly seats. Women outnumber men in these constituencies as they form 30,30,222 of an estimated 60,03,707 electorate, while 29,72,925 are male. As many as 560 voters belong to the third gender for the first of the four-phase polls.
Apr 11, 2019 09:38 (IST)
Andhra Pradesh Assembly Election 2019 LIVE: Facts And Stats
There are a total of 3,93,45,717 registered voters in Andhra Pradesh, including 1,94,62,339 male, 1,98,79,421 female and 3,957 transgenders. Of the total, 10.15 lakh are first-time voters in the age group 18-19. As many as 2,118 and 319 candidates are in the fray for 175 Assembly and 25 Lok Sabha seats respectively.
Apr 11, 2019 09:37 (IST)
Chandrababu Naidu's son Nara Lokesh is the Telugu Desam Party candidate from Mangalagiri Assembly segment that covers Undavalli.

Cast my vote early today! I urge every citizen to fulfil his / her civic duty and pave way for a bright future #IndiaElections2019pic.twitter.com/BaexItFiRQ

Apr 11, 2019 09:29 (IST)
Andhra Pradesh Assembly Election 2019: EVM Glitches Delay Polling
Polling for Assembly and Lok Sabha elections is underway in Andhra Pradesh. In many places electronic voting machines (EVMs) had glitches resulting in some delay in polling, an official said.
State Chief Electoral Officer Gopal Krishna Dwivedi cast his vote in Tadepalli and said there were complaints about technical glitches in EVMs in about 50 places. Technical teams were on the job to rectify the defects and enable polling, he said.
Apr 11, 2019 09:14 (IST)

#WATCH People in Itanagar, Arunachal Pradesh queue up to cast their votes for #LokSabhaElections2019pic.twitter.com/JNpWE8XPmO

Andhra Pradesh IT Minister & TDP's Nara Lokesh in Amaravati: It'll be a decisive win in Mangalgiri (assembly seat) and also across the state. I am here to convince my electorate that I am a meaningful and a worthy candidate, and I think I've done that. pic.twitter.com/fnP9efggPg

"I am very confident. It will go well I guess. I am pretty sure people are looking for a change. I hope it would happen," he added. 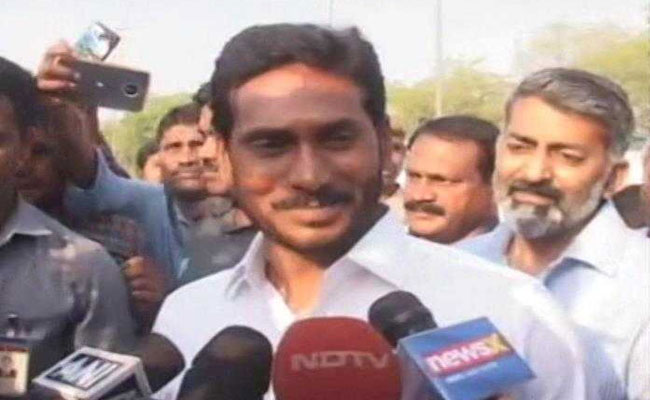 Apr 11, 2019 08:37 (IST)
Andhra Pradesh Assembly Election 2019: Chandrababu Naidu casts his vote
Chief Minister N Chandrababu Naidu and his family members exercised their franchise at a polling station in Undavalli village in the state capital region Amaravati. His son Nara Lokesh is the TDP candidate from Mangalagiri Assembly segment that covers Undavalli. This is the first time that Mr Naidu and his family members cast their votes in the new state of Andhra Pradesh. In 2014 elections, they had voted in Hyderabad, then capital of undivided Andhra Pradesh.

Andhra Pradesh Chief Minister Chandrababu Naidu and his family after casting their vote for #LokSabhaElections2019 in Amravati. pic.twitter.com/QzlYYfNzjd