At present, there are 121 big cats in Kaziranga, 48 in Manas, 28 in Orang, and three in Nameri tiger reserves. 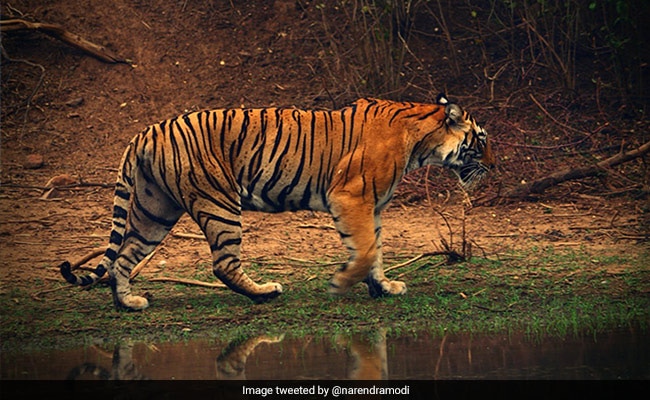 The tiger population in Assam has increased to 200 in 2021 from 159 in 2018 while three of its Tiger reserves-Kaziranga, Manas, and Orang-have received the accreditation of the Global Conservation Assured/Tiger Standards (CA/TS), Minister for Environment and Forests Parimal Suklabaidya said on Thursday.

At present, there are 121 big cats in Kaziranga, 48 in Manas, 28 in Orang, and three in Nameri tiger reserves.

Three tiger reserves at Kaziranga, Manas, and Orang have received the accreditation of the Global Conservation Assured/Tiger Standards (CA/TS) this month for meeting the criterion of effective management of target species for successful tiger conservation, the minister said on the occasion of Global Tiger Day.

Assam and Madhya Pradesh are the only two states in the country where three tiger reserves have received the CA/TS accreditation.

The Global Tiger Day was observed in the state's four tiger reserves with officials, NGOs, wildlife activists, and local communities underscoring the need for conservation of the animal to maintain a healthy ecosystem.

The conservation of tigers has been particularly successful in Manas where its population has increased from zero to 48 in the last 20 years while in Kaziranga it has increased to 121 from 90 in 2015.

Suklabaidya said the conservation of tigers and their natural habitats is crucial for maintaining the health and diversity of an ecosystem.

"The increasing numbers of the big cats should encourage us to pursue conservation and habitat restoration with the same unwavering commitment. Let us pledge to save the habitat of this beautiful, and majestic animal to protect our ecology," he said.

The minister said the increase in tiger population in Assam and other parts of India augurs well at a time when there has been a decline in the population of the big cats elsewhere.

Assam in particular and the country as a whole has been able to reach the goal of doubling its tiger population four years ahead of schedule of the St.Petersburg Declaration on Tiger Conservation, he added.

The International Tiger Day or Global Tiger Day is observed on this day every year to raise awareness about the loss of the tiger population globally and the need for conservation.

The theme for this year is "Save Forest, Save Wildlife: Their survival is in our hands".