Kaziranga National Park has been hit by three waves of flood so far this year with 92 per cent of its area being submerged in waters that has killed 123 animals, including 12 rhinos. 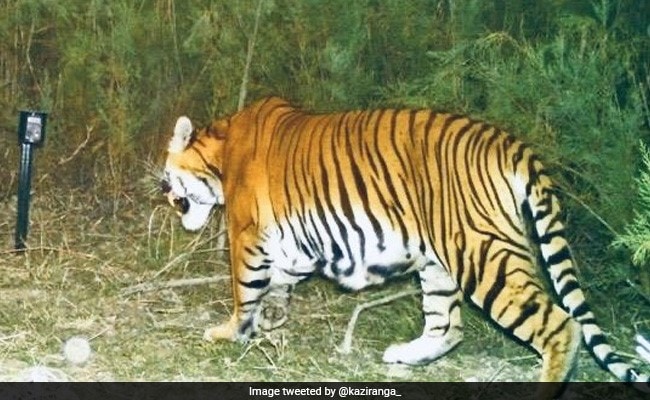 The tweet shared by the official handle showed the photo of a tigress which was camera trapped.

The devastation in Assam's Kaziranga National Park caused by heavy rain and flood has killed many animals and affected the livelihood of several people.

The Park has been hit by three waves of flood so far this year with 92 per cent of its area being submerged in waters that has killed 123 animals, including 12 rhinos. Amid all the destruction caused by the deluge, there is some good news which came from Laokhowa Burhachapori Wildlife Sanctuary, buffer of Kaziranga Tiger Reserve where the successful evidence of breeding of tigers was camera trapped for the first time in 15 years.

The news was shared by the official twitter handle of the park saying, "ROAR GETS LOUDER First ever camera trap evidence of successful breeding of tigers in Laokhowa Burhachapori Wildlife Sanctuary, Tiger buffer of Kaziranga Tiger Reserve. Result of more than 15 years of hard work and effort. Kudos." The tweet also showed the photo of a tigress which was camera trapped.

One twitter user requested the official handle to upload some pictures to which the park replied that they'll be uploading the photos soon.

"We are waiting for approval from our Director. Very soon, it will be uploaded. Thank you," read the tweet.

Few days ago, Prince William and his wife Kate Middleton expressed concern and distress over the devastation in the Kaziranga National Park.

In a letter to the Park's Director P Sivakumar, the Duke and Duchess of Cambridge said they were heartbroken to hear about the appalling devastation to the Kaziranga National Park and its wildlife caused by very heavy monsoon flooding.

While flood is an annual occurrence in Assam, this year's large-scale inundation has taken place due to breaches in the network of embankments along the Brahmaputra and its tributaries.