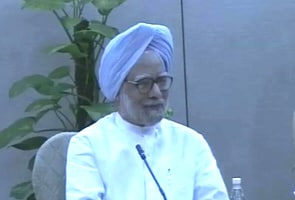 Guwahati: Braving security threats by the anti-talk faction of the ULFA and a shutdown call by the militants, Prime Minister Manmohan Singh on Friday inaugurated the platinum jubilee celebration of the Assam legislative assembly and said that he wanted to make the state "a new engine of growth" for the northeast.

People of Assam, particularly Guwahati, also defied militant diktat and came out in large numbers to have a glimpse of the Prime Minister, who has been elected to Rajya Sabha from Assam thrice - in 1995, 2001 and in 2007.

The Prime Minister thanked the people of his "adopted home state of Assam" for giving him "a sense of belonging" and said that he wants to see Assam emerge as a new engine of growth for the north eastern region and the country as a whole in the 12th Plan period.

"I am truly delighted to be here once again in my adopted home state of Assam. I am particularly happy to be here a week after Bihu. I wish the people of Assam sustained peace, progress and prosperity" he said.

"I was born in a distant and dusty village in a part of this subcontinent that is no longer in India. At a tender age, I became homeless and a migrant. It is in Assam that I have finally found a home that has given me a sense of belonging," he added.

The Prime Minister also termed the Assam assembly as the "tallest pillar of democracy in this part of the world" and paid his tribute to the "great daughters and sons of Assam who have sat in these hallowed portals", giving expression to the free voice and spirit of the people of Assam.

"This legislative assembly is a temple of our democracy. It is a sacred place for us to reaffirm our constitutional commitment to pluralism, to human rights, to secularism and to the dignity of every citizen," he said.

The prime minister also complimented the Assam government for taking the state to new heights of development.

"I would like to see Assam emerge as a new engine of growth for the northeastern region and the country as a whole in the 12th Plan period. I am confident that in the 12th Plan Assam will be able to record a rate of growth of over 9.0 percent," Mr Singh said and assured all possible help on the part of central government to achieve this goal.

The Prime Minister also mentioned the Assam gas cracker project, the 750 MW thermal power project at Bongaigaon and said that completion of these projects will further push the growth of Assam.

He also assured about taking up the issues of strengthening trade relations with neighbouring countries like Bangladesh and Myanmar. "While we have already taken steps to boost trade with Bangladesh, I will discuss with the Myanmar government on how we can increase opportunities for expansion of trade, economic cooperation and connectivity to the larger Association of South East Asian Nations (ASEAN) region during my scheduled visit next month," he said, adding that Assam and the other states of the northeast can and should play leading roles in India's efforts to look eastwards.

Promoted
Listen to the latest songs, only on JioSaavn.com
The Prime Minister was flown in an MI 18 helicopter of the Indian Air Force (IAF) from the airport to the Nehru Stadium from where he visited the B. Barooah Cancer Institute at 11.30 am.

The ULFA has called a 12-hour Assam bandh from 5 am to 5 pm on Friday protesting the Prime Minister's visit. The banned outfit had also carried out two bomb blasts at Jorhat and Sivsagar in upper Assam on Thursday night.
Comments
Manmohan Singh in AssamULFA bandh in Assam on PM visitPM on Assam