Assam prays for peace this Eid 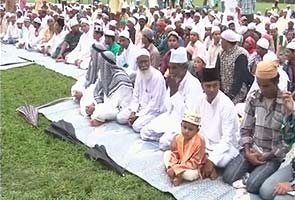 Guwahati: Peace remained the central focus of Eid in Assam on Monday with thousands of people offering Namaz-e-Eid at mosques across the state, including in the troubled Kokrajhar, Chirang and Dhubri districts where 77 people have been killed in ethnic clashes and more than four lakh displaced.

Thousands of Muslims participated in special prayers organised at Eidgahs, mosques and open grounds and asked for lasting peace in Assam, particularly in the Bodoland Territorial Areas Districts (BTAD).

"We have organised special prayers today (Monday) to pray for lasting peace in Assam. The true meaning of Islam is peace and we have prayed to the Almighty Allah to empower every one of us so that we can follow the true spirit of Islam," said Anowar Hussain, the imam of the Burha Jame Mosque in Guwahati, which is one of the oldest mosques in the state.

Hussain said that all Eid committees in Assam had decided to organise the special prayers to pray for peace as well as for the well-being of the displaced people in three recent violence hit districts of the state so they can return home soon.

"We have also prayed to the Almighty to stop the mistrust among communities that have made several people from this part of the country flee from states like Karnataka, Andhra Pradesh, Maharastra and others," said Hussain.

Chief Minister Tarun Gogoi also participated in the community prayer at the Machkhowa Idgah field and appealed to people from all religious backgrounds to maintain the age-old tradition of communal harmony.

"Assam has a history of communal harmony. The diverse communities residing in Assam has been living together since ages and we all must maintain the age old harmony, which has been a identity of the people of Assam," said Gogoi after offering his prayers.

The chief minister also interacted with people from diverse backgrounds at the Idgah field and announced a financial assistance of Rs. 50 lakh for development of Idgah fields in Assam.

Promoted
Listen to the latest songs, only on JioSaavn.com
According to the 2011 census, 31.3 percent of Assam's total population is Muslim and there are over 300 mosques in Assam's main city Guwahati.

The mood was subdued in Kokrajhar, Chirang and Dhubri, where district administrations made special arrangements for inmates of relief camps so they could offer their prayers.
Comments
Burha Jame MosqueAssam EidEid namazBTAD