Assam NRC Final List: The government said it would also assist the people with the appeals with detailed directions. Another 200 tribunals will be added to the existing 100 tribunals by December to hear the appeals. 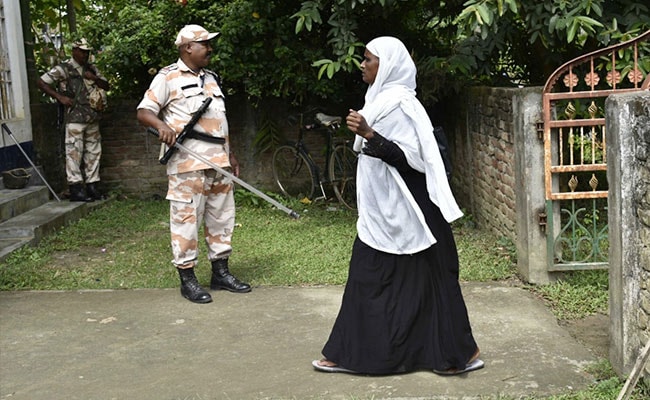 Assam NRC: A Muslim woman arrives to check her name on the final list of NRC in Assam's Morigaon (AFP)

The Centre on Sunday said exclusion from the citizen's list in Assam will not make a person "stateless" or a "foreigner" and they would not be deprived of any rights or entitlements. Around 19 lakh people have not been included in the National Registry of Citizens, leaving them open to government action unless they can prove themselves to be Indian citizens.

Amid angry statements from the opposition and the leaders of the Assam BJP, UN High Commissioner for Refugees Filippo Grandi on Sunday asked the government not to detain or deport anyone whose nationality is not verified. "Any process that could leave large numbers of people without a nationality would be an enormous blow to global efforts to eradicate statelessness," news agency AFP quoted Mr Grandi as saying.

In the evening, the foreign ministry said, "Exclusion from the NRC (National Registry of Citizens) has no implication on the rights of an individual resident in Assam".

"For those who are not in the final list will not be detained and will continue to enjoy all the rights as before till they have exhausted all the remedies available under the law," the ministry added.

The government said it would also assist the people with the appeals with detailed directions. Another 200 tribunals will be added to the existing 100 tribunals by December to hear the appeals.

The updating of the NRC, the ministry spokesperson said, not an "executive-driven process". It is directly monitored by the Supreme Court directly and the government is acting in accordance with the directives issued by the court.

"It is a non-discriminatory process, which leaves no room for bias and injustice. As can be seen from the application form for data entry in NRC, there was no column in the application asking for the religion of the applicant," the ministry said.

The ministry said its statement was in view of the "commentaries" in sections of the foreign media about aspects of the final NRC, which were incorrect.