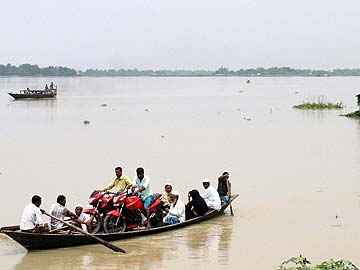 Villagers carry motorcycle on a boat to safer areas in flood affected Balimukh village of Morigaon district, Assam on Tuesday.

Guwahati: Assam suffers an average loss of Rs 200 crore every year due to devastating floods with nearly 40 per cent of the state's total land declared as flood-prone by the government.

According to the Economic Survey, Assam for 2013-14 tabled in the Assembly during the ongoing Budget session, the average annual loss due to flood in Assam is to the tune of Rs 200 crore and in 1998, the loss suffered was about Rs 500 crore.

The survey also pointed out that the national average of flood-prone area in the state was about a quarter of the total land area of the state.

The survey said the flood-prone area of India as a whole stands at about 10.2 per cent of the total area of the country.

"Records show that average annual area affected by flood (in Assam) is 9.31 lakh hectares. The flood protected area of the state is 16,500 sq km (16.5 lakh hectares) till date," the survey pointed out.

Besides, the scale of the problem has grown with massive erosion, which stands at an average rate of 8,000 hectares every year in the state with a total of 4.27 lakh hectares of land having been washed away since 1950.

The two main rivers Brahmaputra and Barak with their 48 major tributaries and innumerable sub-tributaries are the reasons behind the state's recurring problem that also damage roads, bridges, schools, communication systems, houses, crops, livestock and other facilities, leaving an adverse impact on the development of the state.

To address this, the flood control activities in Assam started mainly after the announcement of National Water Policy and subsequently 'Outlines plan for flood control in Assam' along with various comprehensive plans were prepared and the priority areas were identified, the Economic Survey said.

The State Water Resources Department has been implementing numerous flood management schemes from the beginning of 2nd Five Year Plan and are continuing till now, running into several thousands of crores, the document said.

The government has undertaken some new initiatives to get rid of this problem such as using space technology for project planning, using geo-synthetic material for construction of flood management structure, reclamation of eroded areas, selective dredging and setting up of a river study centre.

The geographical area of Assam is 78,438 sq km, of which 56,194 sq km and 22,244 sq km fall under the Brahmaputra and Barak valleys respectively.
Comments
AssamIndiaState Water Resources DepartmentBrahmaputra valleyBarak valley