Assam Chief Secretary Alok Kumar held that it was important to keep the peace, especially with the general elections just a few months away. 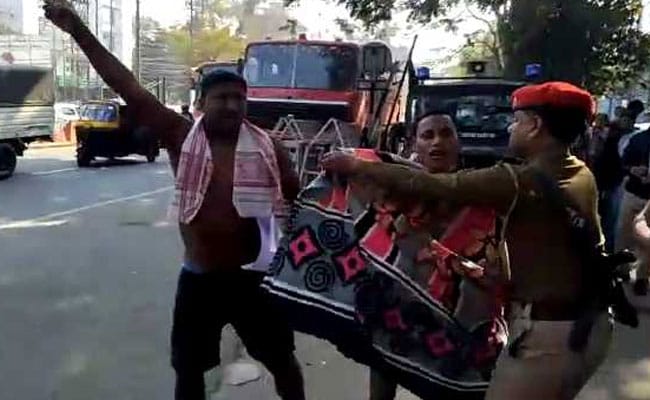 For the first time since massive protests against the Citizenship Amendment Bill erupted across the Northeast last month, the Assam government has admitted to facing a "challenging situation" that requires it to maintain calm against all odds. And it is prepared to meet any eventuality arising out of the bill's introduction in the Rajya Sabha.

"The government understands that people have the democratic right to protest in order to convey their ideas, but certain actions -- such as stripping -- should not be done in a mature society. They should not resort to violence either," said Assam Chief Secretary Alok Kumar.

He was referring to a recent incident where three men staged a nude protest against the controversial legislation outside the Assam Secretariat in Dispur. While one of them was completely naked, the others had stripped down to their undergarments. They were immediately taken into police custody.

Mr Kumar held that it was important to keep the peace, especially with the general elections just a few months away. "The situation is definitely challenging in our assessment, but we have kept it under control," he said. He refused to comment on Assam Minister Himanta Biswa Sarma's recent remark that the protests against the Citizenship Amendment Bill are orchestrated by terror group ULFA, saying that police are still investigating if there's any such angle to the case.

The bill, passed in the Lok Sabha on January 8, seeks to amend the Citizenship Act-1955 for granting expedited Indian citizenship to non-Muslim immigrants from three neighbouring countries. While people hit the streets to protest against facilitating the entry of outsiders, social groups alleged discrimination against immigrants on religious grounds.

At least four chief ministers from the Northeast have raised their concerns on the bill until now. Recently, Meghalaya Chief Minister Conrad Sangma and Mizoram Chief Minister Zoramthanga visited the national capital in a combined effort to make the centre scrap the controversial legislation in the face of raging protests across the region.

The Assam Police has registered eight cases related to violence and wrongful restraint against protesters, and 15 have been arrested so far.