Student Activist, Out On Bail, Says Mission To Free Other Political Prisoners 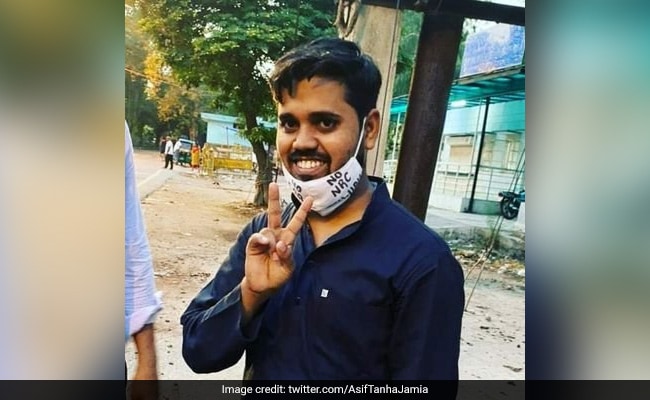 Student activist Asif Iqbal Tanha, who was released on bail after being arrested under the UAPA in connection with the northeast Delhi riots, on Tuesday said securing the release of other political prisoners is their mission now.

Mr Tanha, who walked out of Tihar last week, met his mother, who had come down from Hazaribagh in Jharkhand.

A Jamia Millia Islamia student, Mr Tanha also expressed his gratitude towards his friends, his organisation Students Islamic Organisation of India (SIO) and civil society members who raised their voice for him and other political prisoners like him.

"I want to say and write a lot, but the most important thing to emphasize that while Devangana, Natasha and my release is a moment of joy but not a victory. Many of our friends are still languishing behind bars.

"Securing their release and putting a stop on the misuse of UAPA is our next mission. I hope that all those who have been arrested 4 Delhi Pogrom & Bhima Koregaon will be free soon & we will all once again crowd the streets, revive our democracy and establish social justice (sic)," he said in a series of tweets.

While thanking God, who "gave me courage... to bear the atrocities of jail and the mental stress of court proceedings", he said that his mother and family were his greatest source of "courage and patience" after him.

"Coming out of jail after 13 months and meeting my mother, family, friends and fellow activists, I feel like a caged bird who found a new sky. This sky is much higher, weather more pleasant and inviting for a long flight," he said on Twitter.

He also thanked the team of lawyers, and said, "In today's India, It's nothing short of a miracle for a UAPA accused to step out of prison within 13 months."

The high court had on June 15 granted bail to Mr Tanha and Jawaharlal Nehru University (JNU) students Devangana Kalita and Natasha Narwal, saying in an anxiety to suppress dissent the State has blurred the line between right to protest and terrorist activity, and if such a mindset gains traction, it would be a "sad day for democracy".

The trio walked out of Tihar on June 17.