Asif Ali Zardari's trip to Ajmer a message against extremism: US media 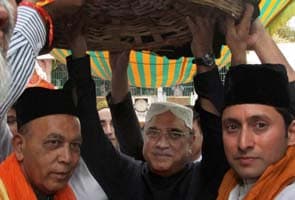 Washington: Describing Pakistan President Asif Ali Zardari's India visit as a trip "heavy on symbolism if not on substance", the US media today said his pilgrimage to the shrine of Khwaja Moinuddin Chishti in Ajmer sent a message against Islamist extremism.

"No breakthroughs were announced, but both sides hailed the meeting as a sign of easing tensions along one of the world's most dangerous borders," The Los Angeles Times reported in a news dispatch from New Delhi.

"Sunday's one-day visit was heavy on symbolism if not on substance," the daily said.

The Los Angeles Times along with The Washington Post and The New York Times made specific mention of Zardari's invitation to Singh to visit Pakistan.

"The question now is how soon Mr Singh will be able to visit Pakistan, a trip that many analysts regard as instrumental to any major diplomatic breakthroughs.

"Since taking office nearly eight years ago, he has often voiced a desire to visit Pakistan, but he has yet to make the trip, either because of political considerations at home or because of fraught relations between the countries," The New York Times reported.

"If nothing else, Zardari's pilgrimage to the marble-domed Sufi shrine in Ajmer, a town in the western state of Rajasthan, sent a message against Islamist extremism," The Washington Post said.

Suicide bombers in Pakistan have repeatedly targeted worshippers at the graves of Sufi saints in a campaign to forward militant views that the sites violate Islamic tenets, it said.

Promoted
Listen to the latest songs, only on JioSaavn.com
"It is a bold statement by Pakistan's President Zardari to come to this shrine at a time when there are fears of hard-liners taking over everywhere," said Salim Mahajan, an Indian activist for Sufism.

"It is a good signal he is sending about the tolerant and assimilative form of Islam," he added.