Sachin Pilot said the Congress government completed one year in the state and has fulfilled the promises it had made while also exhorting that the party has to work taking cognisance of public sentiment. 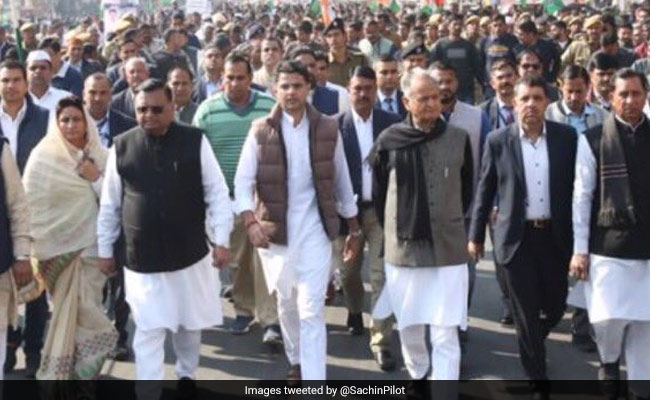 Congress workers led by Chief Minister Ashok Gehlot and Deputy Chief Minister Sachin Pilot took out a flag march in Rajasthan capital Jaipur on Saturday to protest against the "anti-people" policies of the BJP-led Central government.

The flag march started from Shaheed Smarak and reached the party's state headquarters.

The party had decided to take out a flag march raising ''Save India, Save Constitution'' slogans against the policies of the Centre on its 135th foundation day.

At the headquarters, party state president Pilot hoisted the Congress flag and everyone took oath of the Preamble of the Constitution.

Addressing the event, Mr Pilot called upon party workers to take the issue of ''Save India'' among the people. He said, "We have to reach people with the Save India message. In the times to come, we have to show that the Constitution is supreme."

Mr Pilot said the Congress government completed one year in the state and has fulfilled the promises it had made while also exhorting that the party has to work taking cognisance of public sentiment.

Chief Minister Gehlot said the Congress party has a long history of 134 years and sacrifice has been a tradition of the party.

He said, "Fascist people have come to power wearing a mask of democracy. But, the people have recognised them, which is why BJP is losing power in states one after the other."

The senior leader said the entire party is united under the leadership of the party's interim president Sonia Gandhi against the "wrong policies" of Prime Minister Narendra Modi led BJP government at the Centre.

The event saw participation of several MLAs, ministers and a large number of party workers.