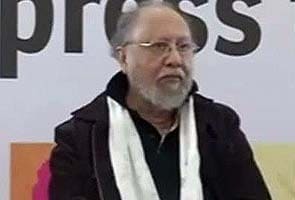 New Delhi: Sociologist Ashis Nandy moved the Supreme Court today seeking quashing of the FIR registered against him for allegedly making anti-Dalit remarks at the Jaipur Literature Festival. The court has agreed to hear his plea tomorrow.

Mr Nandy's lawyer told the court that the case against his client was "misconceived" and that he "didn't say anything derogatory." He added that since there was an apprehension that Mr Nandy might be arrested, he has asked the court to take up at the earliest a petition seeking a stay on his client's arrest.

"We have come to the court because of political compulsion. A case has been registered.   Prevention of SC Atrocities Act is being misused against him. The case against him is misconceived. Nandy didn't say anything derogatory. The FIR against him should be quashed," he said outside the court.

The Jaipur Literature Festival witnessed fireworks on Saturday after the sociologist made a controversial comment on corruption and people belonging to the Scheduled Castes, Scheduled Tribes and Other Backward Classes, which drew a strong response from the audience.

At a panel discussion at the festival, Mr Nandy said, "Most corrupt people come from Other Backward Classes, Scheduled Castes and Scheduled Tribes."

After his comments caused a furore, Mr Nandy issued a clarification saying he was trying to make the point that corruption among Dalits is noticeable while that of the rich is not.

A police case was registered against Mr Nandy by a local politician, Rajpal Meena, amid a barrage of criticism from politicians.

Promoted
Listen to the latest songs, only on JioSaavn.com
The Jaipur Police has summoned Mr Nandy to the city for questioning "at the earliest".