In a statement, the external affairs ministry said the two leaders discussed entire gamut of bilateral relations but it did not specify whether they specifically deliberated on the situation in Doklam. 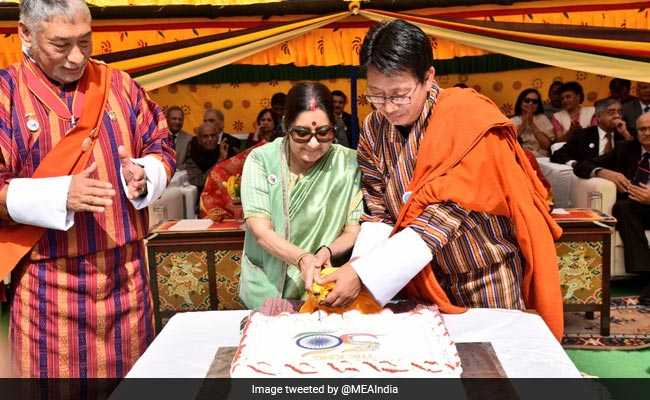 New Delhi: External Affairs Minister Sushma Swaraj on Wednesday held wide-ranging talks with her Bhutanese counterpart Lyonpo Damcho Dorji during which they resolved to further advance the "exemplary ties" between the two countries for mutual benefit.

In a statement, the external affairs ministry said the two leaders discussed entire gamut of bilateral relations but it did not specify whether they specifically deliberated on the situation in Doklam.

In an address at an event at the Bhutanese embassy, Ms Swaraj reaffirmed India's "abiding" commitment to advance the special and privileged partnership with Bhutan, asserting that it was built on shared values and aspirations, utmost trust and mutual respect. Ms Swaraj and her Bhutanese counterpart also cut a cake to mark the 50th anniversary of "establishment of formal diplomatic relations between India and Bhutan," MEA spokesperson Raveesh Kumar tweeted.

Earlier in the day, Army Chief General Bipin Rawat said the situation in Doklam is "absolutely fine" and there is no reason to worry.

In the statement, the MEA said Ms Swaraj and Dorji "expressed satisfaction at the excellent state of bilateral ties, which are unique and time tested, and reiterated their commitment to further advance these exemplary ties for mutual benefit."

It said the two leaders discussed entire gamut of bilateral relations, including the upcoming high-level exchanges between the two countries.

The MEA said the two leaders reviewed the commemorative activities planned this year to mark the golden jubilee of the establishment of formal diplomatic relations between India and Bhutan.

"We are proud of the special and exemplary ties of friendship and cooperation that we share with Bhutan, which are built on shared values and aspirations, utmost trust and mutual respect. It is a unique partnership built on the historical and cultural linkages between the two countries," Swaraj said.

"Let me reaffirm, on behalf of the government and the people of India, our abiding commitment to nurture and advance our special and privileged partnership with Bhutan," she added.

She was speaking at the Bhutan embassy here at an event to mark the 50th anniversary of the establishment of Indo-Bhutan diplomatic relations, coinciding with the birthday celebrations of the king of Bhutan. Mr Dorji was also present at the function.

Ms Swaraj said the two sides also propose to organise 50 commemorative events and exchanges, cultural and sporting activities across different states in India and Bhutan that will truly epitomise their friendship.

Promoted
Listen to the latest songs, only on JioSaavn.com
Ms Swaraj also welcomed the opening of the consulate of the Bhutan government in Guwahati in the golden jubilee year, saying it would further strengthen contacts and cooperation, for mutual benefit.