In a statement released to the media, Annu Tandon said that she has sent her resignation to party president Sonia Gandhi and requested her to accept it immediately. 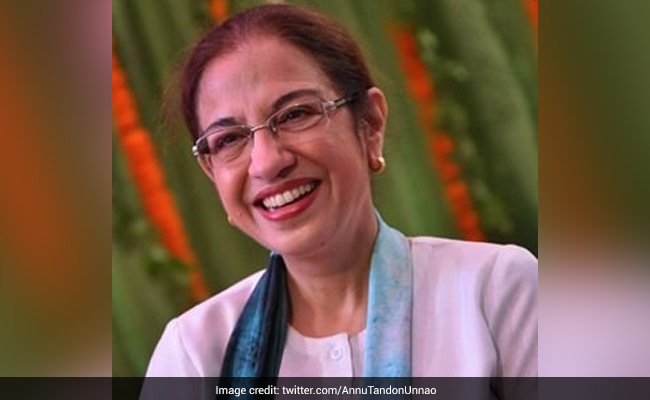 Annu Tandon said there is a "misalignment between the state-level leadership".

The Uttar Pradesh Congress removed senior leader Annu Tandon from the party on Thursday shortly after she announced her resignation citing "misalignment with the state-level leadership".

Training her gun on the state leaders, Ms Tandon said she has sent her resignation to party president Sonia Gandhi.

When asked about it, UP Congress chief Ajay Kumar Lallu said she "has been expelled from the party for six years on charges of anti-party activities".

She had "not been taking interest in party programmes for a long time" and the disciplinary committee of the party looked into these charges, Mr Lallu added.

The development comes days ahead of the November 3 by-election in Bangarmau Assembly seat under Unnao, once represented by Tandon in Lok Sabha.

In a statement released to the media in the morning, Ms Tandon said that she has requested Sonia Gandhi to accept her resignation immediately.

While stating that she had continuously received warmth and guidance of Congress president Sonia Gandhi and Rahul Gandhi during her 15-year association with the party, Ms Tandon said there is a "misalignment between the state-level leadership" and she did not see their support coming her way since the past several months.

"The state leadership of the party has focused only on social media management and self branding and is oblivious to the deep divisions in the party and the voters it has thus caused," Ms Tandon said.

She said canards were being spread about her and her associates by the local, irrelevant, and chosen few.

Terming it both "painful and disgusting", she said there was no attempt by the party leadership to stem this.

Ms Tandon said she had raised the matter with in-charge of UP Priyanka Gandhi Vadra, who had assured that the Congress president is fully apprised of the situation. However, the matter had remained unresolved.

"My ideology and principles have been aligned with the senior leadership of the party and my resignation does not change this," she said, adding she would be consulting her workers on the future path.