Ankita Bhandari, a 19-year-old receptionist at a resort near Rishikesh in Uttarakhand, was allegedly killed by the resort owner and two of his accomplices. 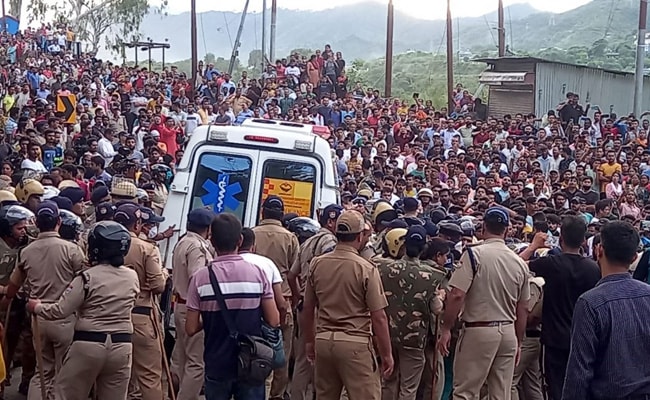 The main accused in Ankita Bhandari case on Wednesday could not file their bail application in a court here after a local body of lawyers decided to boycott them, even as protests were held demanding a CBI probe into her murder.

The matter was to be heard virtually in the civil court here but lawyers refused en masse to move the bail applications on behalf of the "perpetrators of such a heinous crime".

The Bar Association of Kotdwar passed a resolution not to represent the accused, a lawyer said.

Earlier, Anganvadi workers, with sickles in their hands, and women associated with different organisations held a protest here demanding a CBI probe in the case.

The protesters from Rikhnikhal, Ekeshwar, Dwarikhal and Dugadda in the district took out a rally from Jhanda Chawk to the tehsil briefly, blocking NH 534 on the way, and handed over a memorandum addressed to Chief Minister Pushkar Singh Dhami to local authorities.

Ward councillor Saurav Naudiyal said he had submitted a memorandum demanding a CBI probe into the case.

The protesters also demonstrated outside the court demanding the hanging of Ankita's killers.

In Dehradun, the Congress held a dharna at Gandhi Park for a CBI probe into the Ankita Bhandari murder case, saying it has no confidence in the ongoing investigation by the SIT.

“The chief minister hurriedly ordered the demolition of the resort to destroy evidence. The DGP's telephonic conversation with the slain girl's father was recorded and put in the public domain. It is a crime. How can we trust an SIT constituted by him? We demand a high court-monitored CBI probe into the case,” state Congress chief Mahra said.

Chief Minister Dhami announced financial assistance of Rs 25 lakh to the family of Ankita Bhandari and assured her family that the case would be heard in a fast-track court.

"The state government is with Ankita's family. We will extend all help to them. The case is being probed by an SIT (Special Investigation Team). The investigation will be conducted impartially and completed as soon," he said.

Meanwhile, a senior police official said the case is being investigated from all angles with total promptness.

Bhandari, a 19-year-old receptionist at a resort near Rishikesh in Uttarakhand, was allegedly killed by the resort owner and two of his accomplices.

The official said the three accused, including resort owner Pulkit Arya, were arrested within 24 hours of the matter being handed over to the regular police force from revenue police on September 22.

"A special investigation team (SIT) headed by a DIG-level officer is fast collecting the evidence based on which we can plead for the hanging of the accused in the court of law," he said, requesting anonymity.

Rubbishing allegations that the accused are being shielded by destroying evidence related to the case in the garb of demolishing parts of the resort, he said there has been no tampering with the evidence.

Asked why the VIP guest, who finds a mention in Bhandari's chat with her friend that has now gone viral and to whom she was asked to offer "extra service" for money at the resort, is yet to be brought under the ambit of the probe, the official emphatically said he will also be included.

"It is, in fact, in our efforts to find out about him that we have summoned Ankita's friend from Jammu. The investigation will be carried forward on the basis of his interrogation," he said.

The accused had said they had pushed Bhandari into the Chilla canal on September 18 and her body was found on September 24.

He said that samples from her body parts have been sent for a forensic examination to rule out rape and the report is likely to be available soon.

The probe is being conducted very fast and the truth will soon come out, he said.

"People should keep patience. Ankita will get justice," he asserted.

The SIT probing the case on Tuesday seized a grey Activa and a black Pulsar motorcycle, which were suspected to be used in the crime.

The SIT has also summoned a couple who had worked at the resort earlier and others for interrogation, it said.

The SIT has found the list of guests staying at the resort on the day of the incident. It has also collected physical evidence and is examining electronic evidence such as CCTV footage and mobile call records.

The main accused Pulkit Arya is the son of former Bharatiya Janata Party leader Vinod Arya, who was expelled by the party when Pulkit's name cropped up in the case.

Also on Wednesday, an RSS office bearer who had uploaded an objectionable post on the social media against the kin of Bhandari after her murder was booked for sedition and spreading caste animosity.

"A case has been registered against Vipin Karnwal, an RSS functionary, at the Raiwala police station under the IT act for sedition and spreading caste animosity,'' Rishikesh SDM Dinesh Chandra Dhaundiyal said.

Karnwal's social media post had sparked tension in Raiwala and Rishikesh with protests at different places. The highway to Delhi was blocked by protesters on Wednesday too but they lifted the blockade after an assurance from the police that a case will be lodged against Karnwal.