Angry, But War Not Solution: Brother Of CRPF Soldier Killed In Pulwama

CRPF soldier Vijay Kumar Maurya's biggest worry was being unable to see his 18-month-old daughter grow up because he had to be away for work in a very challenging environment, his family said

The last four days have been a complete blur for the family of Vijay Kumar Maurya, a 30-year-old soldier from eastern Uttar Prasdesh's Deoria, who died in the attack on a CRPP convoy in Jammu and Kashmir's Pulwama last week.

Mr Maurya's funeral at his village Chippiya Javdev was attended by thousands of people shouting anti-Pakistan slogans. UP Chief Minister Yogi Adityanath was the latest VIP who visited the village. He told reporters that the Modi government is preparing a strong response to the attack.

In the last three days, processions of hundreds of young men on bikes and tractors, with loudspeakers blaring anti-Pakistan slogans have also landed up at the doorstep of Mr Maurya's three-room concrete home in the village.

The family of the solider say they have just one message for everyone - "War, retribution won't help".

"I just want to say there is a lot of anger. In my village. In UP. Across India. People are asking for war. But I believe that war is not a solution. In both sides, growth will stop, whether it is of the country or families," Mr Maurya's elder brother Ashok Kushwaha told NDTV.

Decades ago, the soldier's father, 73-year-old Ramayan Singh Kushwaha, had enrolled for the Army. He says it was his dream to join the Army but he could not clear the physical test. His son Vijay became the first person from the family to get into the armed forces. 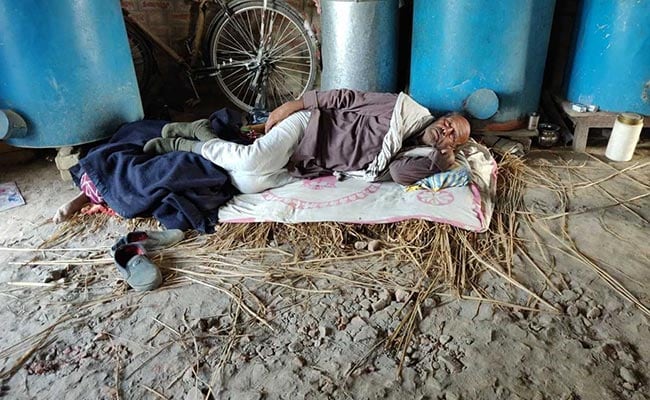 Decades ago, the soldier's father, 73-year-old Ramayan Singh Kushwaha, said he had enrolled for the Army but could not pass the physical test

The soldier's elder brother works with a private company in Gujarat.

Mr Maurya's village is in Deoria's Bhatni block, close to the border with Bihar. A job in the Army or the paramilitary forces in these parts is about serving the country, but also about a life of dignity and respect in an area where living with poverty and caste-based discrimination is a reality for many.

Mr Maurya's family belongs to the Other Backward Classes. But his decade-old job in the Central Reserve Police Force (CRPF) helped blur caste lines and divisions for the entire family. "His job in the CRPF meant a lot to all of us. People used to call me out as Vijay's brother. Caste is a big thing in these parts but a CRPF person is looked at with a different prism. You must have seen during his funeral and even now, so many people are coming here," said the soldier's brother Ashok.

Just days before his death in Pulwama, Mr Maurya had come home on vacation. He absolutely adored his 18-month-old daughter and his biggest worry was being unable to see her grow up because he had to be away for work in a very challenging environment. Mr Maurya had been posted for about four years in Jammu and Kashmir and was expecting a transfer soon.

"You know they used to chat everyday even when he was in Kashmir. Both he and his wife have those mobile phones and they used to video-call all the time. His wife used to give him a tour around the house with the phone. I managed to see him too," said the soldier's father, tears in his eyes.

"Criminal Gone, But What About Those Protecting Him": Priyanka Gandhi On Vikas Dubey's Death