The BJP in Jammu and Kashmir ended its alliance with the People's Democratic Party (PDP) on June 19 this year, leading to the fall of Mehbooba Mufti's government. 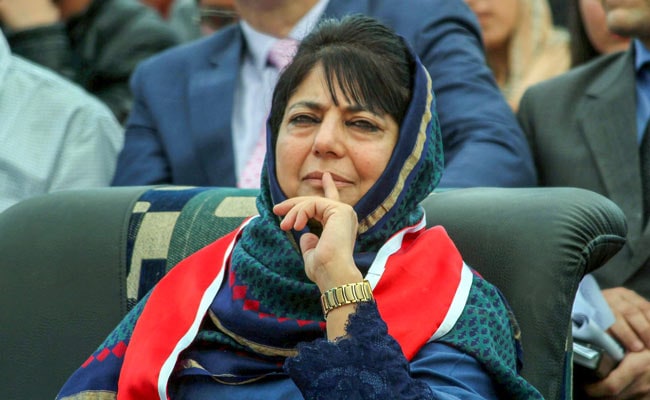 The PDP should have been the one to pull out of alliance with the BJP, Mehbooba Mufti's close aide said

The PDP should have been the one to pull out of the alliance with the BJP after the brutal rape and murder of an eight-year-old girl in Kathua, a close aide of former Jammu and Kashmir chief minister Mehbooba Mufti has said.

"Perhaps she should have resigned before but it was a tough call," said Amitabh Mattoo.

Mr Mattoo, who admitted he should have advised her to pull out of the alliance earlier, was speaking at the launch of the book, "The Generation of Rage in Kashmir" by journalist David Devdas in New Delhi on Tuesday night.

The book explores vital aspects of the conflict economy, murders for rewards, and terror acts by state-backed mercenaries in Jammu and Kashmir.

"I would have advised Mehbooba, which I didn't -- in retrospect incorrectly it seems -- that now (Kathua rape) is the time to pull out," said Mr Mattoo, who was appointed as an advisor to Ms Mufti during her tenure as chief minister.

The BJP in Jammu and Kashmir ended its alliance with the People's Democratic Party (PDP) on June 19 this year, leading to the fall of Ms Mufti's government.

The rift between the two parties widened after two BJP lawmakers, Lal Singh and Chander Prakash Ganga, participated in a rally in March this year to support the accused in the Kathua rape case, who were arrested by the state police's crime branch.

Defending Mufti Mohammed Sayeed's decision of forming an alliance with the BJP, Mr Mattoo said he was certain that had the late chief minister been alive, the alliance would have survived.

"I think, while he was alive, there was no doubt in my mind that even when he was gravely ill, there was still a possibility that the experiment could have survived.

Recalling the days when the idea of an alliance was on the drawing board, he said it was a "huge dilemma" for Mufti Mohammed Sayeed for the simple reason that he had secured majority within the Kashmir Valley but Jammu and Ladakh were completely taken over by the "Modi wave".

In the 2014 Jammu and Kashmir assembly elections, the BJP had 25 lawmakers and the PDP 28 in the 89-member state assembly, both far short of the majority mark of 45.

Mr Mattoo argued that the late former chief minister had never known Prime Minister Narendra Modi and had "assumed that he was a pragmatic (Atal Bihari) Vajpayee-like figure who needed to bury the ghost of the past and move on".

"He (the late CM) felt he could temper the BJP and Sheikh Abdullah's (founder of National Conference party) greatest error of judgement that he limited his struggle only till the Pir Panjal and never moved to the plains of Jammu. So, by reconciling Jammu, Ladakh and Kashmir's aspirations, they could arrive at a model of reconciliation beyond Jammu and Kashmir and eventually all over South Asia," he added.

About the formation of a second BJP-PDP alliance after the death of Mufti Mohammed Sayeed, Mr Mattoo recounted that Ms Mufti had taken three months to arrive at a decision, and her aim was to solely get a better deal from the centre.

However, recognising "the fragility of democratic politics in Kashmir, you had a coup, most of the PDP members were willing to jump the gun and join any party which was going to form the government", he said.

"In such situations, you will not even trust your own shadow," the former vice-chancellor of Jammu University added.