The BJP said it had set up 70,000 flat-screen TVs and 15,000 giant LED screens across West Bengal for Amit Shah's virtual rally on Tuesday. 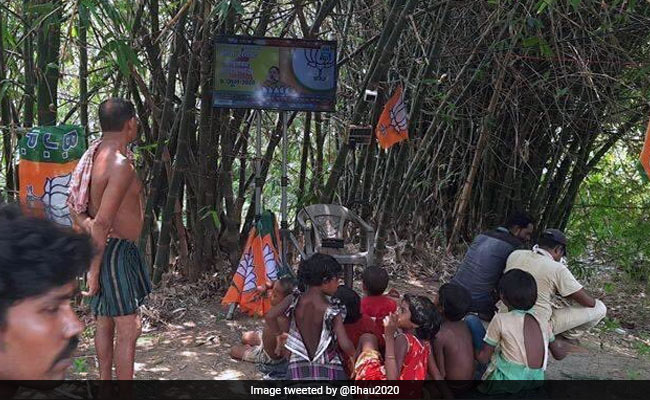 The BJP said Amit Shah's virtual rally in Bengal was a "huge success".

A photo of villagers huddled around an LED TV, affixed to a bamboo shrub, in remote West Bengal has set off a storm of reactions on Twitter at a time when large parts of the state are struggling to recuperate from the devastation of Cyclone Amphan and India grapples with the coronavirus crisis.

The BJP had set up 70,000 flat-screen television sets and 15,000 giant LED screens across the state for Union Home Minister Amit Shah's virtual rally on Tuesday that set off its campaign for assembly elections due next year, party sources had told journalists. The state has an estimated 78,000 polling booths.

BJP National General Secretary BL Santhosh tweeted a photo of villagers watching Mr Shah on one of the TV sets, saying it was a sign of the party's "relentless pursuit for the last five years".

People in remote villages of West Bengal listening to @AmitShah during #BJPJanSamvad . This is the reach @BJP4Bengal has achieved thru' relentless pursuit for last 5 years . People want better days . pic.twitter.com/hBpzysKDNU

But the image also drew consternation from the party's political opponents Congress and Aam Aadmi Party.

Uttar Pradesh Congress leader Rakesh Sachan said the BJP cannot send Rs 7,500 to the poor and the labourers hit by the coronavirus lockdown, or arrange transport for them but was going all out to promote its election campaign.

The Aam Aadmi Party ran a caption contest on the photo and, in a shot at a BJP slogan, also said, "LED screens instead of ventilators. The country is really changing."

Migrant labourers haven't reach yet to their home in Bihar but BJP's LED reached before them.

Finally the best use of Hawala "PM Cares Fund" .

Don't have money to take back Migrants to their homes, but could conduct 72,000 LED's for campaigning in remote areas of bihar.Self serving dirty politicians of the BJP! The only things that they can do with competence- spreading lies, doing jhumlas and polarization! pic.twitter.com/kcQtrYm1BQ

BJP has loads to money to set up LED screens. And to hire some people to show as supporters. @ttindia sums up what that virtual rally was all about: 'crows CAA, CAA' ???????? https://t.co/mKfK2h2f3J

LED instead of Ventilator. BJP needs only Governance in all states by hook or crook. As far as ventilator is concerned, everyone had seen the quality of ventilator ordered in Gujarat recently by top BJP brass. https://t.co/5h6avpITF2

The BJP on Tuesday had said that Amit Shah's virtual rally was a "huge success" as more than two crore people across West Bengal watched it, a claim which the ruling Trinamool Congress described as "far from reality".

Mr Shah addressed the rally from New Delhi as part of the BJP's nationwide "Jan Samvad" campaign which he has insisted has nothing to do with elections but has already covered Bihar and Bengal - states headed for polls.

Extolling his government's commitment to migrant labourers and the poor, lakhs of whom were left without income, food and shelter because of the sudden nationwide lockdown, Mr Shah said the BJP would emerge victorious in both the states.