"These are not just words but letters of thanks written from the heart," Amit Shah said. 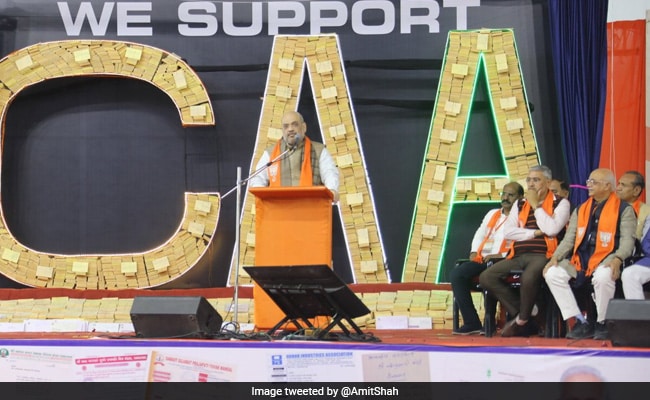 The letters were stacked on the dais as Amit Shah spoke.

Union Home Minister Amit Shah on Saturday unveiled over five lakh postcards written by the residents of Ahmedabad to Prime Minister Narendra Modi, thanking him for the Citizenship Amendment Act. The postcards were stacked on the dais as Mr Shah addressed a gathering of BJP workers who formed letters "CAA'' in front of him.

"These are not just words but letters of thanks written from the heart. Our public outreach programme is a reply to the lies being spread against the CAA," Mr Shah said at the gathering.

Targeting Rajasthan Chief Minister Ashok Gehlot, Mr Shah said, "Congress has a government in Rajasthan. The Congress party in the state had promised that Hindus and Sikhs from Pakistan would be given citizenship."

"We are fulfilling the promise made by you. Why are you opposing it?" he asked.

"In 2006 and 2009, Ashok Gehlot wrote a letter for the same. We covered Hindus, Sikhs, Parsis, Christians, all of them under the Act. You (Rajasthan government) had only mentioned Hindus and Sikhs," Mr Shah claimed.

With Citizenship Amendment Act, PM Modi has granted "human rights to lakhs of people," he added.

Amit Shah challenged Bengal Chief Minister Mamata Banerjee and her Delhi counterpart Arvind Kejriwal to show if any provision of the act took away the citizenship of Indian Muslims.

"There is no such provision. Lakhs and crores of people have come to India from Pakistan, Bangladesh to save their religion, their self-respect, to save themselves. Where else will they go?" Mr Shah asked.