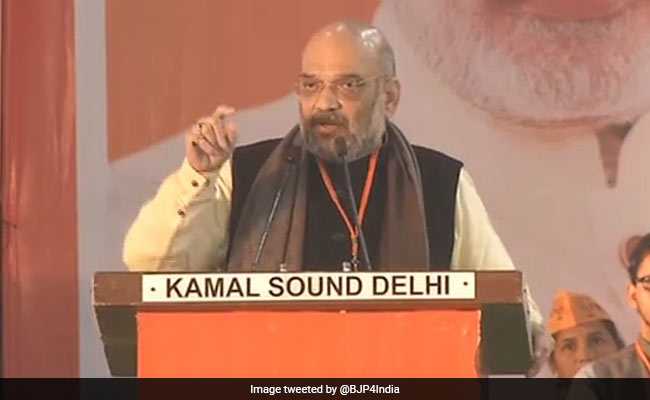 Slamming the Congress and the AAP, BJP chief Amit Shah on Sunday said what happened in the Delhi Assembly over the adoption of a resolution on the 1984 anti-Sikh riots was like "rubbing salt" on the victims' wounds.

An resolution in the Delhi Assembly on the 1984 anti-Sikh riots sparked triggered a political row. Deputy Chief Minister of Delhi Manish Sisodia said original resolution placed before the house did not propose withdrawal of Bharat Ratna awarded to former prime minister Rajiv Gandhi. He said it was a handwritten amendment proposed by a member, and it cannot be passed in such a manner.

"What has happened in the Assembly and later was like rubbing salt on the wounds of the anti-Sikh riot victims," Mr Shah said without elaborating.

"It has exposed the double-faced character of the Aam Aadmi Party," he said at a conclave of the BJP's booth level workers in Delhi.

The Sikh victims had been denied justice for so many years because "the perpetrators of the riots were also the protectors (of the accused)", the BJP chief said in a veiled reference to the Congress.

Mr Shah said Prime Minister Narendra Modi-led government at the centre in four years of its rule had not only "assured justice" to the victims by formation of a special investigation team but also provided compensation to the affected families.

He also trained his guns at Mr Gandhi over the Rafale deal.

"Despite the Supreme Court's judgement on the Rafale deal, he (Gandhi) is still lying and levelling allegations," Mr Shah said.

Speaking about illegal immigrants, he reiterated that the BJP government will identify and expel the "infiltrators" from the country.

He questioned the Congress' stand over the issue.

"The NRC exercise was started in Assam and as soon as it happened Rahul baba and company started crying hoarse. I want to ask Rahul if he has any concern for the countrymen dying in terrorist blasts," he said.

"Why do you (Rahul Gandhi) worry about them? Are they your cousins (mausere bhai)?" he asked.

Exuding confidence about the BJP returning to power after 2019 Lok Sabha polls, Mr Shah said the party's win will mean the victory of nationalism over casteism and nepotism.

He claimed that the BJP will return to power in 2019 with a bigger mandate than 2014.

Targeting the AAP, he said the party's chief and Delhi Chief Minister Arvind Kejriwal, who claims to be a common man, is now moving around with security personnel.

"Where are the hospitals, schools, marshals in buses for women's security and CCTV cameras? The condition of Mohalla Clinics is such that filth and dogs have been found in many of them," he said.

The Kejriwal government has "failed" to keep its promises in Delhi, he alleged.

Mr Shah claimed that the Modi government had fulfilled all its promises for Delhi and the BJP will give an account of its work to the voters in 2019 elections.

He added that it was "unfortunate" that the Kejriwal government did not allow implementation of the Ayushman Bharat scheme in Delhi fearing Modi will gain popularity.

Mr Shah accused the Congress of "bungling" crores of rupees by using the National Herald building as "private property". He alleged that the party hid Rs 600 crore to save income tax.