At a rally in Jantar Mantar in the heart of Delhi, Rahul Gandhi launched a strong attack on the Prime Minister. Amit Shah hit back with a series of tweets 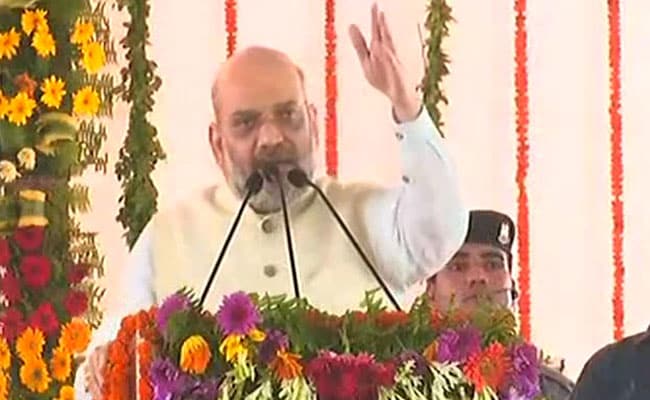 Amit Shah says the Congress is "patronising and condescending" towards the Dalits.

For the Congress chief, his advice was, "when you are free from winking and disrupting Parliament, give some time to facts as well" -- a reference to Mr Gandhi's unexpected hug for PM Modi, followed up by a wink during last month's no-confidence motion that the BJP had heaped scorn on.

Mr Shah's series of scathing tweets came after a sharp attack on the party and Prime Minister Narendra Modi by the Congress chief at a rally in the national capital today.

The unrest among Dalits has been simmering since a Supreme Court judgment was seen as diluting the stringent anti-atrocities act earlier this year. The Dalits now want the judge who passed that order punished.

Retired Justice AK Goel currently heads the top environmental court in the country. The Dalits demand that he be removed, even though the government plans to buttress the atrocity act through an amendment.

At a rally in Jantar Mantar in the heart of Delhi, Rahul Gandhi launched a strong attack on the Prime Minister. "Modiji thinks Dalits have no place in India's future... In education of advancement," he said. "If Modiji had space for Dalits in his heart then the policies for Dalits would have been different."

Soon after, in a series of tweets, Amit Shah took on the Congress leader. Citing the Congress' treatment of Babasaheb Ambedkar, Babu Jagjivan Ram and Sitaram Kesari, he said the party was "patronising and condescending" and for years, "insulted Dalit aspirations".

Accusing the Congress of opposing a "tough SC/ SCT Act and OBC Commission," Amit Shah said the party's attitude towards Dalits was "patronising and condescending".

"Is it a co-incidence that the year Mrs. Sonia Gandhi joined the Congress, the Third Front-Congress Government opposed reservations in promotions and the year Rahul Gandhi becomes Congress President, they oppose a tough SC/ ST Act and OBC Commission! Anti-backward mindset visible," read another tweet.