Union Home Minister Amit Shah today declared at Rajouri in Jammu and Kashmir that the Pahari community will soon get reservation in education and jobs as Scheduled Tribe (ST) — a pre-election promise aimed at widening the BJP's support base. If implemented, this quota will be the first instance of a linguistic group earning reservation in India. The central government will have to amend the Reservations Act in Parliament for it.

"The GD Sharma commission set up by the government has sent the report and recommended reservation for Gujjar, Bakarwal and Pahari communities. It will be given soon," Mr Shah said at a rally that marked the start of the BJP's campaign for elections likely next year.

He claimed such reservation became possible only after the special status of Jammu and Kashmir under Article 370 was struck down. "Now, minorities, Dalits, tribals, Paharis here will get their rights."

Population of Paharis in the UT is estimated to be around 6 lakh, of whom 55 per cent are Hindus and the rest Muslim. But the Gujjar and Bakarwal communities — who have 10 per cent ST quota already — have been resenting tribal status to Paharis, saying that Muslims and Hindus from privileged classes should not get quota on the basis of language alone.

Mr Shah said existing STs "will not lose anything". He claimed that "some people" tried to "instigate" Gujjars and Bakerwals, but "the people saw through their designs". 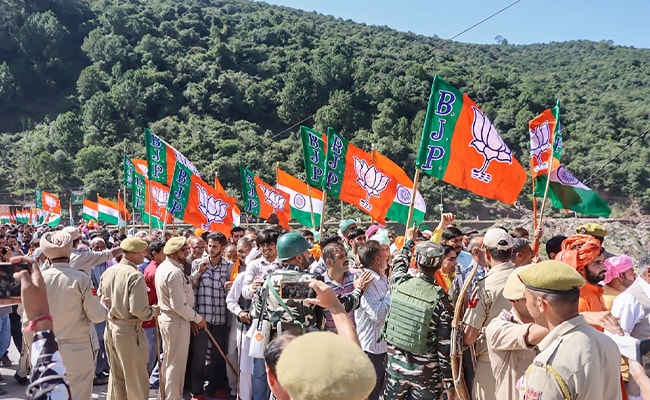 BJP supporters gathered for a rally to be addressed by Amit Shah in Rajouri He has another rally on Wednesday, in Baramulla, north Kashmir, as part of three-day visit that began yesterday.

He urged crowds to thank Prime Minister Narendra Modi for the move on August 5, 2019, when Articles 35A and 370, Constitutional provisions that gave some autonomy to Jammu and Kashmir, were hollowed out. The state was divided into two UTs — Ladakh was thus separated — of which Jammu and Kashmir can have an elected assembly. Its first elections are likely early next year as the process of demarcating constituencies and finalising voter rolls is almost finished.

Mr Shah said, "I want to appeal to you to free Jammu and Kashmir from the clutches of three families that ruled here." He did not name the families, though the PDP of the Muftis and National Conference of the Abdullahs have been his targets, as have been the Gandhis of the Congress.

Jammu and Kashmir, the state that was, last had an elected government four years ago, in which the BJP was a partner and Mehbooba Mufti of the PDP was Chief Minister. The BJP's withdrawal of support led to the collapse of that government, and the region is under central rule since June 2018.

Mr Shah asked the people to "strengthen" Narendra Modi who has "given reservation and empowered the Paharis and Gujjars".

"Power is now with 30,000 people who were elected to panchayats and district councils through fair elections," he added, underlining that village-level elections had already been held. "Earlier, all money sent by the Centre for development was usurped by a few, but now everything is spent on welfare," he claimed.

He also claimed that the security situation is "far better" now due to the "strong action" taken against terrorists by the Modi government.

Mehbooba Mufti has said the BJP's claims belie facts on the ground. "It is just dividing communities by using reservation," she has alleged.