Director General of National Investigating Agency or NIA Dinkar Gupta briefed Amit Shah about the progress made by the agency in both cases. 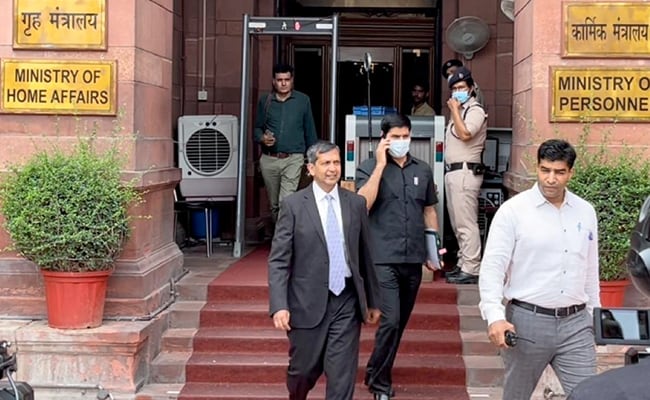 Home Minister Amit Shah on Monday met the anti-terror agency chief at his office and directed him to ensure speedy justice in the Udaipur and Amaravati killings.

Kanhaiya Lal, a tailor in Udaipur, was killed by two men who also filmed the act on June 28. A week before Umesh Kolhe, a pharmacist, was killed in Amravati on June 21.

The Director General of National Investigating Agency or NIA Dinkar Gupta briefed Mr Shah about the progress made by the agency in both cases. The meeting lasted for over 40 minutes.

The agency has also made the fifth arrest in Udaipur tailor's murder.

Wasim Attari, a resident of Udaipur, has been arrested for having links with Dawat e Islami and as per the agency had gone to Pakistan with Ghouse Mohammad, one of the prime accused in the case.

"All these five accused knew each other for quite some time and were part of a WhatsApp group. After Nupur Sharma incident some motivational messages were shared between them in a WhatsApp group," explained a senior official.

According to the official, Ghouse during his interrogation has also disclosed that he was a member of Barelvi sect of Pakistan - Dawat e Islami.

"He confessed that from cross border some people had suggested that they need to do something big apart from demonstrations which were being done in different cities in India," he said, adding that demonstrations against Nupur Sharma statement were also being conducted in Pakistan.

Nupur Sharma, a former spokesperson, was suspended by the BJP for her offensive remarks on a television debate against Prophet Muhammad. Last week, the Supreme Court made strong verbal observations on Nupur Sharma's comments, holding her responsible for the state of violence in the country.

Riyaz Attari, Ghouse Mohammed, Mohsin and Asif have been remanded to NIA custody. The first two accused had beheaded Kanhaiya Lal while the other two have been arrested for abetment and conspiracy.

"Ghouse had sharpened his weapon at a shop of Mohsin," discloses a senior NIA official.

The agency is probing if Ghouse only got direction for execution or was provided logistic support too.

"We need to find out how many other such youngsters have been radicalised by such groups," explains an official.

The agency has ruled out any connection between the Udaipur and Amravati killings.

"As of now there is no link between two incidents but the fact is demonstrations were carried out in many cities which similar slogans were raised," explains another official.