Karnataka Chief Minister BS Yediyurappa was present at the Bhoomi poojan ceremony on the campus. 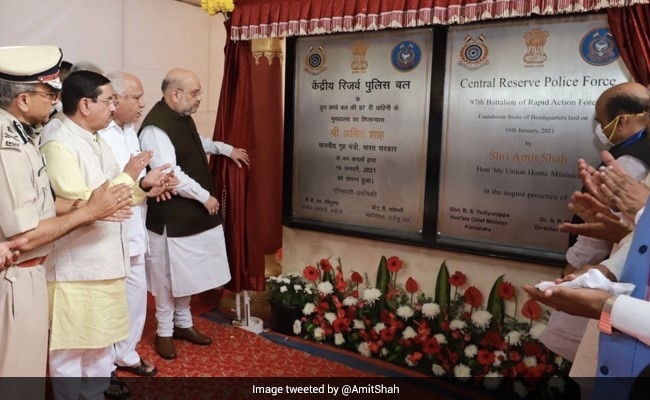 Karnataka Chief Minister BS Yediyurappa was present at the Bhoomi poojan ceremony on the campus.

In his address, the Home Minister lauded the contribution of RAF in the maintenance of peace and order across the country and remarked that RAF personnel have earned trust and credibility owing to expertise and excellence which became the reason for invitation from United Nations in their peacekeeping missions in 2006, CRPF said in a press release.

Laid the foundation stone of the 97th battalion of Rapid Action Force (RAF) in Bhadravathi, Karnataka.

This 50 acre campus will have all the modern amenities like hospital, school, sports facilities including a stadium and swimming pool for our RAF personnel and their families. pic.twitter.com/flEGbizj3I

Dr AP Maheswari, Director General of Central Reserve Police Force (CRPF) expressed gratitude to the government for allocating land to CRPF and to the people for giving the force a place in their hearts. The DG said that RAF is a people-friendly, gender-sensitive, and neutral force which is not only demanded by all states across the country but has also made its mark on international forums.

Rapid Action Force is the specialised force of CRPF to deal with riots and situations relating to public order, the press release said.

Raised in 1992, RAF has made a distinct reputation owing to its courage, commitment, and professional efficacy, it said. The peacekeepers of RAF clad in blue camouflage uniforms have become a symbol of effectiveness and "Serving humanity with sensitive policing," the motto of RAF, it added.

Owing to the increased demand of RAF, the central government had approved raising of five new RAF battalions in 2018 thus taking its strength to 15 battalions, an official release said.

Of these five battalions, 97 Battalion RAF has been strategically placed at Shivamogga, located almost in the central part of Karnataka, to deal with riots or riot-like situations primarily in Karnataka, Kerala, Goa, Puducherry and Lakshadweep and also attend to the needs of Tamil Nadu, Telangana, and Andhra Pradesh if so required, the release said.

The 50.29 acres of land provided by the state will not only serve as the headquarters of 97 Bn RAF but the proposed 314 quarters will also cater to the housing needs of RAF personnel and their families. Attuned to the needs of personnel and families, the campus will have amenities like hospital, Kendriya Vidyalaya, administrative building, family welfare centre, and sports facilities including a stadium and swimming pool, the release stated.

On Sunday, Shah will inaugurate the ethanol project of Kedarnath Sugar and Agro Products Ltd followed by the inauguration of KLE Hospital's advanced simulation centre. He will also address a public rally at Belagavi.