Amid Perceived Rift In Bihar Grand Alliance, A Demand By Smaller Allies

Smaller allies, especially the Left parties, feel that it was high time that a "coordination committee" was put in place, an absence of which is often blamed for the disintegration of the NDA in the state. 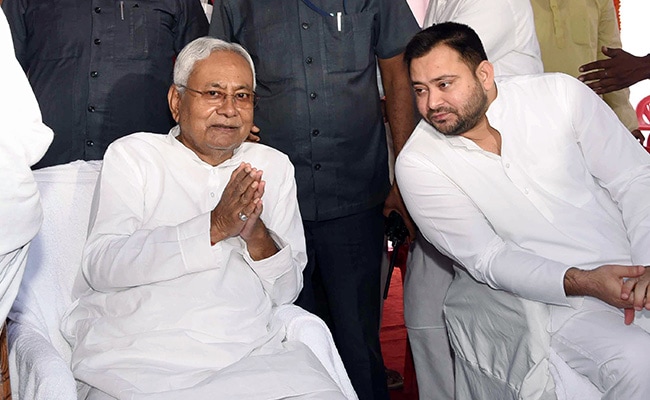 Smaller constituents of the ruling 'Mahagathbandhan' or grand alliance in Bihar today sought to step up the demand for the early formation of a coordination committee amid a perceived rift between the JD(U) and the RJD, the two largest parties of the coalition.

The less than two months old coalition, formed after stripping the BJP of power in the state, appeared to be on the rocks recently when RJD state chief Jagadanand Singh said Deputy CM Tejashwi Yadav would replace his boss Nitish Kumar by next year, and his son Sudhakar lost his job as the agriculture minister after repeatedly putting in the dock the very government of which he was a part.

Mr Yadav, on his part, tried to defuse the situation by asserting that he was "not in a hurry" to occupy the top post and getting Jagadanand Singh to issue a circular forbidding RJD cadres from making any statements that placed the new coalition in jeopardy.

Nonetheless, smaller allies, especially the Left parties, feel that it was high time that a "coordination committee" was put in place, an absence of which is often blamed for the disintegration of the NDA in the state.

"We met the Deputy CM soon after the resignation of Sudhakar Singh with the demand for immediate formation of a coordination committee. We felt that the government was running fine and instances like the behavior of Singh were having an adverse impact," Mahboob Alam, the legislature party leader of the CPIML(L), told news agency PTI.

"We had demanded the formation of a coordination committee and devising a common minimum program soon after the formation of the government. Our objective was to avert such misunderstandings. The need has only grown stronger," said the CPIML(L) leader, whose party is part of the ruling coalition but supports the government from outside.

He claimed that Tejashwi Yadav, whose party has the highest number of MLAs in the assembly, gave a patient hearing and seemed willing to act.

"He asked me to come up with names of representatives whom my party would like to be a part of the coordination committee. I believe he is in touch with other alliance partners as well and we will see some headway," said Mr Alam.

However, all alliance partners realise that for the coalition to survive there must not be any rift between JD(U) and RJD, which together account for 124 MLAs, two more than the magic mark in the 243-strong assembly.

This is the reason why other alliance partners too share the sentiments of the CPIML(L).

CPI national secretary Atul Anjaan said, "Recent developments underscore the need for an early formation of coordination committee though our party had raised the demand at the outset. Our state secretary Ram Naresh Panday had met the Chief Minister to raise the demand and the latter did not seem averse." "With by-elections in Mokama and Gopalganj assembly seats round the corner, the formation of such a committee becomes even more critical. The by-polls will be an occasion for the multi-party coalition to demonstrate its cohesion," added Mr Anjaan.

Congress's Bihar in-charge Bhakt Charan Das, whose party is the third largest constituent of the Mahagathbandhan, seemed averse to comment on the recent turmoil but agreed to the need for a coordination committee.

"There have been discussions regarding the formation of a coordination committee. It will materialise sooner rather than later," he said.