They Amarnath Yatra will begin on June 28 and conclude on August 26. 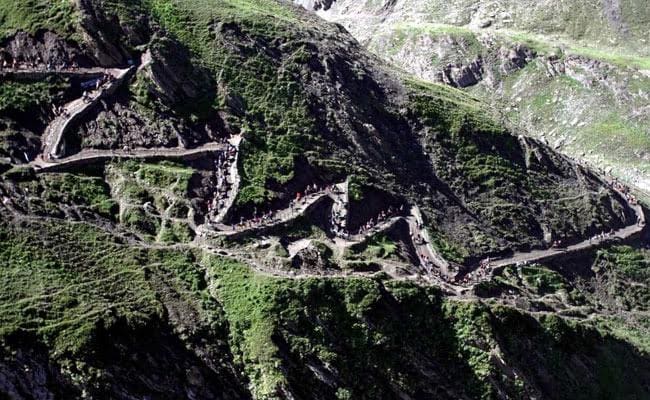 The first batch of Amarnath Yatra pilgrims was flagged of from the Bhagwati Nagar camp in Jammu at 04:45 am on June 27 and they will start their journey to the cave shrine from Baltal and Pahalgam routes on June 28. Officials said a total of 1,904 pilgrims including 330 women and 30 children were part of this batch of Amarnath Yatra pilgrims. The Central Reserve Police Force also launched bike-borne quick reaction teams on Tuesday that will not only respond to any attack or sabotage incident on the yatra route but also double up as an ambulance to rescue unwell pilgrims, security personnel or locals.

Here's all you need to know about the Amarnath Yatra:

They Amarnath Yatra will begin on June 28 and conclude on August 26, coinciding with Raksha Bandhan.

Vehicles tagged with electromagnetic chips, bike and bullet-proof SUV police convoys and scores of bullet-proof bunkers have been deployed as part of the "biggest-ever" security blanket thrown to secure pilgrims undertaking the Amarnath Yatra.

Over 40,000 armed CRPF and state police personnel have virtually dotted the yatra routes from Jammu via Pahalgam and Baltal-- with their overwhelming presence in armoured vehicles.

The advance online booking for Amarnath Yatra helicopter tickets began on April 27, 2018. Pilgrims could book the tickets through the websites of the heli-operators with which the arrangements had been finalised - UTAir India Private Limited and Global Vectra Helicorp Limited for the Neelgrath-Panjtarni-Neelgrath sector and Himalayan Heli Services Private Limited for the Pahalgam-Panjtarni-Pahalgam sector. The helicopter service can be availed at Rs 1,600 for one way for Neelgrath-Panjtarni and Rs 2,751 for Pahalgam-Panjtarni route.

The devotees start their Amarnath yatra from Srinagar or Pahalgam on-foot and take one of the two possible routes. The shorter but steeper trek via Baltal, Domial, Barari and Sangam is 14 km long and allows people to take a round trip in 1-2 days. This Amarnath Yatra route is considered more favourable for returning.  It is steep hence, difficult to climb.

The longer Amarnath yatra route via Pahalgam is generally preferred by most of the devotees. The length of the trek varies from 36 to 48 km. The trek usually takes 3-5 days one way. The Amarnath route is much wider than the Baltal trek and slopes gradually.

Promoted
Listen to the latest songs, only on JioSaavn.com
Registration process of Amarnath Yatra:

Registration and issue of yatra permit is done on first-come-first-serve basis. Travellers can get themselves registered at 440 designated bank branches of the Punjab National Bank, Jammu and Kashmir Bank and YES Bank in 32 states and Union Terriories across the country.