The trigger was Amarinder Singh's remarks that Sukhbir Singh Badal's stance over the issue is a sign of "collusion with the BJP". 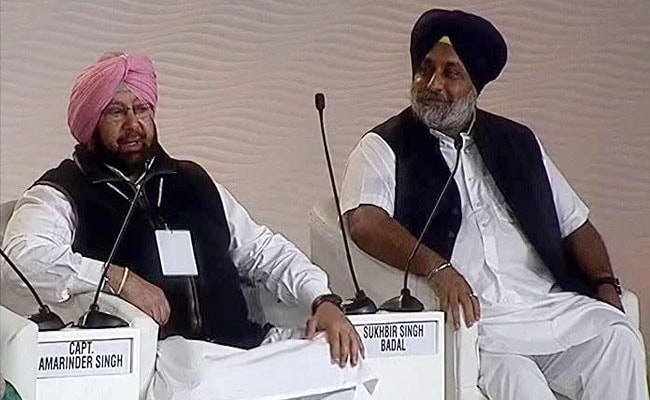 Punjab Chief Minister Amarinder Singh and SAD president Sukhbir Singh Badal on Friday traded charges over the state's bills against the Centre's farm laws, with both accusing each other of colluding with the BJP.

The trigger was Amarinder Singh's remarks that Mr Badal's stance over the issue is a sign of "collusion with the BJP".

In response, the SAD chief accused the chief minister of misleading people and playing a "hoax" on farmers in league with the Centre through the bills.

The CM in a statement said the Shiromani Akali Dal (SAD) had taken yet another U-turn on the farm laws.

He lashed out at Mr Badal for allegedly repeatedly compromising interests of the farmers with his "brazen lies and petty political games, which were clearly aimed at promoting the Centre's anti-farmer agenda".

"In rejecting the state's amendment Bills, which his party had backed in the Vidhan Sabha, (Mr) Sukhbir has not just exposed his lack of moral scruples but had also echoed the recent statements of various Bharatiya Janata Party (BJP) leaders", said the CM in the statement.

"This showed a clear sign of collusion between the SAD and the BJP, suggesting that the entire drama of (party MP) Harsimrat Kaur's resignation from the Union Cabinet and the withdrawal of the Akalis from the NDA was nothing but a total farce aimed at befooling farmers and sabotaging their fight against the central laws," he added.

"First you actively and wholeheartedly supported the Centre's malicious farm ordinances, then quit the NDA calling their bills anti-farmer, then indulged in a whole lot of political drama through protest rallies and yatras across the state in purported support of the farmers, then openly voted for the state government's amendment Bills and now rejecting the same," the CM said.

On Thursday, Sukhbir Singh Badal, who presided over a core committee meeting of his party here, had said opposition members were shocked to see how the chief minister "defrauded" Punjab by "betraying" the unanimous resolution passed by the assembly.

"This resolution mentioned that it outrightly rejected the Centre's acts and committed the state government to declaring Punjab a principal market area. But the bills, which were subsequently brought by the Amarinder Singh government, carried none of these provisions. He is guilty of misleading and betraying the trust of the House," Mr Badal had alleged.

The Punjab Assembly on Tuesday had adopted a resolution and passed four bills to negate the Centre's farm laws.

Slamming the SAD chief, Amarinder Singh said nowhere it was mentioned that the Punjab Government was committed to declaring the entire state as a principal market area, as claimed by Mr Sukhbir.

Hours after Mr Amarinder's statement on Friday, Sukhbir Badal said, "It is condemnable that after playing a hoax on farmers of Punjab in league with the central government, the chief minister is now trying to sell the fraud as an achievement."

"It is shameful that even after Amarinder Singh's fraud had been discovered and it had been proved that he had colluded with the Centre simply to get the ''rail roko'' agitation of farmer organisations lifted, he was trying to mislead Punjabis by trying to shift the blame of his own failures on others," said Mr Sukhbir.

Asking the chief minister to come clean and tell Punjabis why he had chosen to legislate on a subject "on the concurrent list which would require central assent", Mr Badal asked "isn't this a clear sign of collusion with the BJP government at the Centre".

"You knew that the legislation you were introducing in the Vidhan Sabha would not get the presidential assent but still you went ahead with it and ignored all advice to the contrary because you had decided to sell out Punjab's interests at the hands of the centre," Mr Badal alleged.