"Won Any Election On His Own?": Ally Takes "AC Room" Jibe At Akhilesh Yadav, Again

Om Prakash Rajbhar reacts to Lok Sabha bypoll losses in Azamgarh and Rampur , which were seen as Samajwadi Party's strongholds 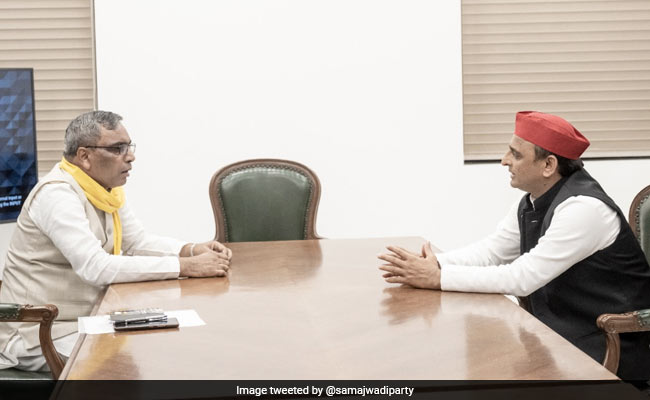 Samajwadi Party's Akhilesh Yadav today came under attack again from a key ally, days after losing the Lok Sabha bypolls in Uttar Pradesh to the ruling BJP. "Can he point out one election he has won on his own?" asked Om Prakash Rajbhar, who heads the Suheldev Bharatiya Samaj Party (SBSP) that won six seats in the assembly polls earlier this year.

"Even this election, he lost," Mr Rajbhar said, to a question about losses in Azamgarh and Rampur, which were seen as Samajwadi Party's strongholds.

"The Samajwadi Party is harming itself. A party whose chief does not campaign in elections, what election will that party fight? He should step out of AC rooms and go to the ground. No one will join you if you sit in AC rooms," Mr Rajbhar added.

Last month, too, Mr Rajbhar took the "too used to AC rooms" jibe at Akhilesh Yadav, though he insisted he would not quit the alliance. He reiterated that today.

Continuing with his jibes, Mr Rajbhar added, "How many villages has Akhilesh Yadav visited? How much grassroots leadership has he built? Let him ask Mulayam Singh Yadav and (uncle) Shivpal Yadav; and they will tell him about blocks and villages. They know."

Mr Rajbhar's party has considerable influence among the Other Backward Classes (OBCs) in eastern UP. He was part of a rainbow coalition stitched up by Akhilesh Yadav ahead of the assembly elections to add to his party's Yadav-Muslim core base. With 125 seats - Samjawadi Party won 111 - the opposition alliance improved its position but could not unseat the BJP-led NDA.

In 2017, Mr Rajbhar had contested the assembly polls as part of the BJP-led coalition. But he left that in April 2019 - in the middle of the Lok Sabha elections - dramatically marching into Chief Minister Yogi Adityanath's Lucknow home at 3 am with a resignation letter, demanding to see him. He had said he was being "ignored" by the BJP, specifically by Yogi Adityanath. The party was upset at not being given its expected number of seats to contest.