The incident has snowballed into a political storm, with senior Congress leader and former Union Minister Arun Yadav hitting out at Chief Minister Shivraj Singh Chouhan

Two distressingly similar cases of families being forced to use two-wheelers to carry relatives - both suspected COVID-19 cases - because they were refused ambulances by hospitals have emerged from Madhya Pradesh.

In the first case, Pandu Chandane, 60, a resident of Indore's Badwali Chowki - which is one of the city's coronavirus containment areas, had trouble breathing and visited the hospital on Monday. According to his brother, the staff there simply prescribed some medicines and sent him home.

The following day, as his condition worsened, the family called the hospital for an ambulance but were refused one. Left with no option, they rushed him to the outpatient department (OPD) of the state-run Maharaha Yeshwantrao (MY) Hospital a small two-wheeler.

Unfortunately he was declared dead by the time they reached the hospital.

"The man had gone to the hospital on Monday and returned home that day. On Tuesday he was first taken to a private hospital, from where he was referred to MY Hospital. But when he reached there he was declared "brought dead"," Dr Jadia said.

The superintendent of MY Hospital, PS Thakur, has confirmed the incident and said health officers had been asked to collect samples from family members to test their COVID-19 status. 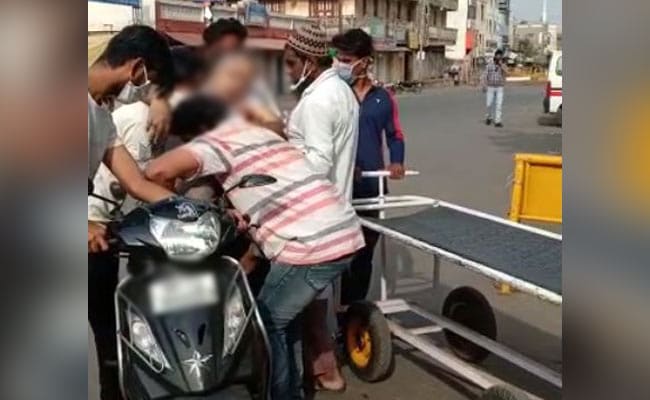 A second incident was reported from Khadakpura area in Khandwa district, where Sheikh Hamid, 65, was also refused an ambulance. Already suffering from blood sugar problems and high blood pressure, he was finally rushed to hospital on a scooter, but died before reaching medical aid.

The Khadakpura area has now recorded 14 COVID-19 cases and been declared a containment zone.

The Indore incident has snowballed into a political storm, with senior Congress leader and former Union Minister Arun Yadav urging Chief Minister Shivraj Singh Chouhan to pay more attention to the health crisis in "your city of dreams - Indore".

"Shivraj Singh-ji, you can praise yourself as much as you want. But please see this video from your city of dreams - Indore - in which this patient went running after three hospitals, still didn't get an ambulance and got only "death"! His body was taken to hospital on a Scooty!" Mr Yadav tweeted.

The state's ruling BJP hit back through spokesperson Rajneesh Agrawal, who accused the Congress of "jumping the gun before getting details".

"Congress is in the habit of jumping the gun before getting details. Any death is unfortunate. The government will look into this matter," he said.

There are nearly 900 confirmed COVID-19 cases, including 53 deaths, in Madhya Pradesh, one of the states worst hit by the coronavirus outbreak. Indore, where this incident occurred, has reported over 200 cases in the last 24 hours alone and accounts for around 70 per cent of the state's cases.

The BJP government in the state, which came to power last month and has been accused of a hand in the dramatic fall of the Kamal Nath-led Congress government, has been criticised for failing to appoint, so far, either a health minister or a home minister.

Across India the number of confirmed COVID-19 cases has crossed 11,000 and 377 deaths have been linked to the virus. Worldwide the number of infected is now 19.8 lakh and the dead 1.26 lakh.