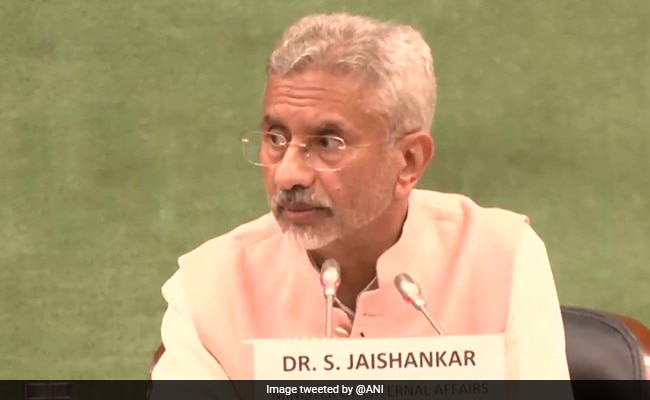 S Jaishankar said there was a logic in showing the details: "We didn't [only] show one or two states."

At least four states' ruling parties -- all in the Opposition at the Centre -- today objected to states' finances being discussed at an all-party meeting on the crisis in Sri Lanka. The central government, which had convened the meeting, later said there was "no political intent" and "the lessons of Sri Lanka are very strong".

Sources told NDTV that Mithun Reddy, an MP from Andhra Pradesh's ruling YSR Congress, was one of the first to object, and then other Opposition parties joined in, including the Telangana Rashtra Samiti, Tamil Nadu's DMK, and West Bengal's Trinamool Congress. The presentation, States' Financial Situation, was then stopped.

TRS sources said, "When the subject was the Sri Lanka crisis, there was no need for this."

But External Affairs Minister S Jaishankar later clarified: "There was a logic in what we were trying to show. We didn't [only] show one or two states. We showed the situation of all the states. There was no political intent; it was a data-based presentation on fiscal prudence."

He added, "The lessons of Sri Lanka are very strong. They are fiscal prudence, responsible Governance… there should not be a culture of freebies."

The government had called the meeting to address concerns of several parties, especially those from Tamil Nadu worried about the condition of the country's Tamil population and the influx of refugees. The agenda was that Mr Jaishankar and the Finance Minister, Nirmala Sitharaman, would brief floor leaders of all political parties in both the Houses of Parliament.

So far, apart from sending humanitarian aid via some channels, India has limited itself to a hands-off role in the crisis. It has, however, assured Sri Lanka that it will continue to support democracy, stability and economic recovery.

But on Sunday, at a meeting of all parties ahead of the Monsoon Session of Parliament, the DMK and AIADMK demanded that India should intervene.