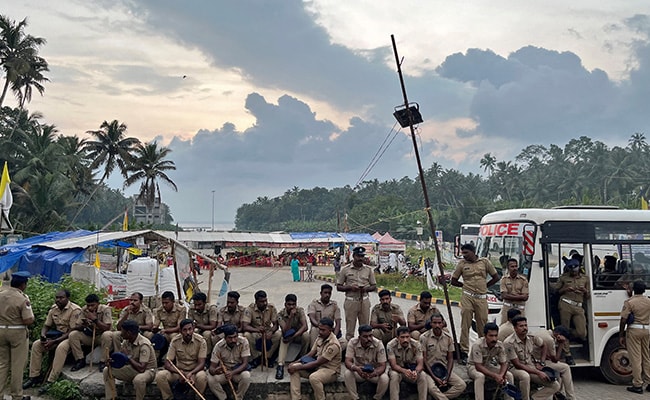 The government called for the all-party meeting after a mob vandalised police station. (File)

An all-party meet on Monday, called for by the Kerala government in connection with the violent attack on Vizhinjam police station, unanimously agreed that peace should prevail in the region but the Latin church remained non-committal on the issue of their ongoing agitation.

"From what I heard, they responded to yesterday's (Sunday) violence as a normal reaction. What can I say to them? You can ask them," Anil told reporters here.

He said all the parties and religious organisations except the protest council, which attended the meeting, unanimously agreed that the seaport project should be completed as early as possible.

The Minister said the cases registered would not be withdrawn.

"Except the protest council, all other political and religious organisations unanimously agreed that the project must be completed without any further delay for the welfare and development of the State," Anil said.

However, all the representatives, including those from the protest council, unanimously agreed to not resort to violence and asked the government to take steps to ensure that such incidents are not repeated.

The State government called for the all-party meeting after a mob vandalised the Vizhinjam police station and attacked and injured around 40 officials. The police resorted to lathicharge to disperse the mob.

A case in this regard was registered today arraigning over 3,000 identifiable people from the region.

Police, in the FIR, said around 3,000 people gathered at the station on Sunday to release one accused in a case registered on Saturday and other suspects - Leo Stanley, Muthappan, Pushparaj and Shanki - who were taken into custody.

The agitators attacked mediapersons, too. The reporters were present at the site. ACV local channel cameraperson Sherif M John was attacked by the protesters, who damaged his camera and snatched his cellphone. He was admitted to Thiruvananthapuram Medical College Hospital.

On Sunday, the police lodged an FIR against at least 15 Latin Catholic priests, including metropolitan Archbishop Thomas J Netto and Perera, over the violence at Vizhinjam on Saturday.

Television channels aired visuals of the vandalised Vizhinjam police station as well as overturned vehicles, including a police van and jeeps.

Meanwhile, the Kerala High Court today, hearing a plea of the Adani Group against the obstruction and blockade due to protests, asked the State government to take stern action on the violence.

The government told the court that there was a loss of Rs 85 lakh in Sunday's violence.

Amid all this, Kerala Chief Minister Pinarayi Vijayan would inaugurate on November 29 an expert meet and seminar on the technical aspects of the under-construction Vizhinjam Port, organised by the Vizhinjam International Seaport Limited.

Earlier in the day, the government termed as unacceptable the attack on the police station by the mob.

The Latin Catholic church, which is spearheading the attack against the Adani port project, claimed outside forces were behind the attack and sought a judicial probe into it.

The ruling CPI(M) said the recent violence in the coastal area was reprehensible and claimed some mysterious forces with vested interests were trying to create a riot-like situation there.

However, the Congress-led UDF opposition, on the other hand, blamed the government for allegedly deliberately provoking the protesters to take up violence by lodging an FIR against at least 15 Latin Catholic priests, including metropolitan Archbishop Thomas J Netto and Vicar General Eugene Pereira, over the violence on Saturday.

"If protest leaders (priests) were to be made accountable for actions of the protesters, then would Pinarayi Vijayan, and CPI(M) State secretary M V Govindan be held responsible for protests and other actions of their party workers," asked Leader of Opposition in the State Assembly V D Satheesan while speaking to reporters in Thiruvananthapuram.

Earlier in the day, Kerala Minister of Ports Ahammed Devarkovil said the government has been patient till now in relation to the protests, but if the agitation attains a criminal nature -- where police personnel are attacked and injured and police property is destroyed -- then that is unacceptable.

"Especially in a secular State like Kerala, we will not allow any kind of communal conflict," the Minister said and claimed that the mob attacked houses and establishments of those not belonging to their community.

"We will go to any extent to ensure communal harmony in the State," the Minister said while speaking to reporters in Kozhikode.

Vicar General Pereira, who has been seen at the forefront of the protests, claimed outside forces were behind the port-related violence in the last two days and said there should be a judicial probe into the incidents.