The Akali Dal, which split from longtime alliance partner BJP last year amid the farmers' anger over the contentious farm laws, has tied up with Mayawati's Bahujan Samaj Party 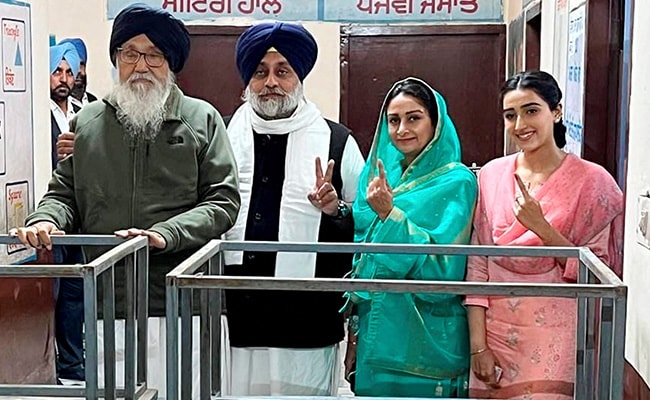 "We will get 80 plus seats," Sukhbir Badal told reporters after casting his vote.

Shiromani Akali Dal leader chief Sukhbir Singh Badal has claimed that the Akali-BSP alliance will make a clean sweep in Punjab, winning more than 80 seats. Amid a multi-cornered contest, polling is in progress today for all 117 constituencies of Punjab. The Congress, which ended the decade-long rule of the Akali-BJP alliance in 2017, is hoping for a second term in power.

The Akali Dal, which split from longtime alliance partner BJP last year amid the farmers' anger over the contentious farm laws, has tied up with Mayawati's party in hope of having the backing of the Dalits. It was a counter to the Congress's choice of a Dalit Chief Minister, Charanjit SIngh Channi, in the state for the first time.

Sukhbir Badal -- who is contesting from Jalalabad in Punjab Assembly elections --  cast his vote at the Badal village in Muktsar district along with his wife and former Union Minister Harsimrat Kaur Badal  and Parkash Singh Badal, Shiromani Akali Dal patron and five-time Chief Minister of the state.

"We will get 80 plus seats," he told reporters after casting his vote.

"We have been standing firm at one place for the last three generations. While many others have moved to other parties on not getting election tickets, like Captain Amarinder Singh," said Parkash Singh Badal.

"As a border state, Punjab has many challenges. I'm sure there's going to be clean sweep in favour of a tried and tested local, regional party that understands the aspirations of the local people," she said.

While AAP is seen as the key challenger to the Congress, Amarinder Singh, who was dropped from the top post last year amid a year-long tussle with Navjot Sidhu, has joined hands with the BJP.